A baby gorilla has been born at Dublin Zoo, and just LOOK at it

Dublin Zoo has announced the birth of a baby western lowland gorilla, born to first-time mother Kafi and father Bangui.

On April 1st, after a gestation period of around 8-and-a-half months, Kafi gave birth to the healthy infant weighing approximately 2-2.5kg.

To date, keepers at Dublin Zoo have been unable to determine the gender of the infant as Kafi has been keeping the baby close to her chest since the birth. And we're crying.

The newborn is the first offspring of Bangui since his arrival at Dublin Zoo last year.

A new baby gorilla has been born at @DublinZoo and look how adorable! pic.twitter.com/yWC48fIQDc 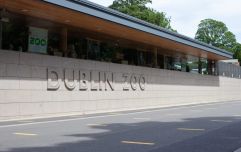 END_OF_DOCUMENT_TOKEN_TO_BE_REPLACED

Helen Clarke-Bennett, Team Leader of the African Plains at Dublin Zoo commented that:

"Kafi is doing a fantastic job so far as a first-time mother, keeping the young baby physically close in these crucial early stages. Bangui is proving to be an attentive father and at night has been sleeping close to Kafi and the baby. Kafi seems comfortable and at ease and we expect her to mix with the rest of the gorilla troop very soon."

"Since she arrived with us back in 2012, Kafi has witnessed other female gorillas give birth and raise their young which has been a huge help in teaching Kafi how to look after her own baby. This new birth is a great step forward for this critically endangered species."

He was quickly accepted as the new alpha-male of the troop and has begun his transformation into a silverback gorilla.

popular
QUIZ: Can you guess the Disney movie from its opening line?
Ghislaine Maxwell, former girlfriend of Jeffrey Epstein, arrested by the FBI
"I never thought it would be cancer": Stage 4 melanoma patient recalls receiving her diagnosis
6 steps for treating acne in adulthood, according to a skin therapist
A comprehensive breakdown of the Shane Dawson/Jeffree Star/Tati Westbrook 'Karmageddon' drama
CONFIRMED: Ozark to return for an expanded fourth and final season
Milkshakes and bacon double cheeseburgers are back at McDonald's next week
You may also like
4 months ago
Welcome to the world! A gorgeous little rhino calf has been born at Dublin Zoo
5 months ago
Dublin Zoo have launched an incredible date package for Valentine's Day weekend
7 months ago
Dublin Zoo are offering half price on adult tickets until the end of 2019
8 months ago
Dublin Zoo is looking for elves to work with Santa this Christmas
8 months ago
There's a new (and very cute) baby gorilla at Dublin Zoo
8 months ago
Dublin Zoo offering half price tickets this weekend for World Animal Day (again!)
Next Page