It's a song most of us will never forget.

The wildly infectious and relentlessly repetitive 'Baby Shark' has just gone and become the most-watched YouTube video of all times, racking up a whopping seven billion plays. 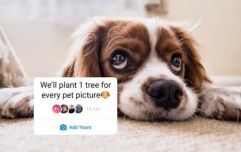 Who started the 'plant one tree for every pet picture' trend on Instagram?

END_OF_DOCUMENT_TOKEN_TO_BE_REPLACED

The stuck-on-your-mind-forever tune is only one minute and 21 seconds long, but its catchy words and melody has prompted an amazing spin-off in terms of live tours and merchandise such as books, toys, clothing and more.

The original writer of the Baby Shark song is unclear – it has, apparently, long been a nursery rhyme – but it became a global phenomenon after being recorded by 10-year-old Korean-American singer Hope Segoine.

It first went viral in south-east Asia, then later in the US and Europe.

popular
A clip has resurfaced of Machine Gun Kelly discussing a teenage Kendall Jenner
People are only realising Kendall Jenner and Gigi Hadid are related and the reactions are gas
Worried about a loved one? Here are 5 signs of suicide to look out for
Seems sudden? This is why the restrictions have completely lifted this soon
FBI reveal that Brian Laundrie is responsible for Gabby Petito's death as they discover notebook
Actress Regina King pays tribute to her son as he dies suddenly
These are the top baby names for 2022
You may also like
1 day ago
Anyone else obsessed with Francis Bourgeois?
3 weeks ago
According to tradition, your Christmas tree should stay put for a while longer
1 month ago
Turns out, we have been using micellar water completely wrong
1 month ago
TikToker fakes a wedding photoshoot to get back at ex
1 month ago
What is the 'yassify' trend and why is everyone doing it?
2 months ago
WATCH: Woman "disgusted" as she catches man filming her in gym
Next Page