He has been released on probation.

A 17-year-old boy has avoided a prison sentence for his involvement in an incident which saw a young girl fall head-first under a DART train.

The teenager accepted his presence was intimidating and was released on six months of supervised probation on Tuesday. 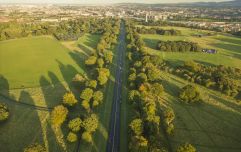 END_OF_DOCUMENT_TOKEN_TO_BE_REPLACED

On 1 April last year, CCTV footage emerged of a girl at Howth Junction station in Dublin falling between the platform and a stationary train. The video gained widespread public attention.

Security guards had removed a group of about ten youths off a train due to anti-social behaviour that day. However, they were still on the platform as a group of girls came and tried to catch the train.

Footage showed the girls running onto the platform. One boy swung his foot at one girl, making contact with her head.

Another boy appeared to use the handlebars of his bike to lunge at one of the girls, causing her to fall. 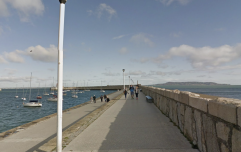 END_OF_DOCUMENT_TOKEN_TO_BE_REPLACED

The girl was thankfully pulled free from the tracks by a security guard and passer-bys before the train began moving.

She had several injuries and was visibly shocked and distressed by what had happened.

Gardaí said the girl had found it difficult to go to school since the incident and would spend "most of her day in the toilet crying".

Under directions from the Director of Public Prosecutions (DPP), investigating gardaí charged three of the boys, aged 17, with violent disorder.

END_OF_DOCUMENT_TOKEN_TO_BE_REPLACED

One of them was given an additional charge for assault for causing harm to the girl knocked off the platform.

His case has been separated and sent forward to the Circuit Court for trial.

At a hearing last month, the two other boys were found guilty of violent disorder.

One of the boys interviewed by Gardaí identified himself in the video evidence holding an electric bike. When Gardaí asked him why he left after the girl fell off the platform, he replied: "I felt bad I didn't help her; I was in shock."

“In situations like that, you just walk away. You don't get involved," he added.

On Tuesday, Probation Service furnished a pre-sentence report on that boy to the court. As stated, he has been released on six months of supervised probation.

However, if he fails to co-operate, gardaí could re-enter the case and he could face a harsher sanction.

popular
Vogue Williams slams man who refused to swap seats with her on plane
Tasha and Andrew have officially started looking for a home together
Greg O'Shea actually left Love Island to go to his granny's funeral
Ryanair, easyJet and BA issue warning to anyone boarding with smart bag
Green Party representative calls for a temporary ban of stag and hen parties in Ireland
Medics were called into Love Island villa after Ekin-Su had a panic attack
Katie Piper rushed to hospital for emergency eye surgery
You may also like
1 month ago
For just €87k a month, you can stay in this 'luxury' Dublin Airbnb
1 month ago
Is the Lonely Planet article about Dublin accurate? A Dubliner responds
1 month ago
'I'm Irish!' - Selling Sunset stars Mary and Romain return to Dublin for pints and trad
1 month ago
Get ready for an epic All Out Summer Adventure with these coastal trips in Mayo and Dublin
1 month ago
There's a rooftop bar opening soon by Dublin Airport
1 month ago
Apparently Harry Styles wasn't allowed into a Dublin restaurant after staff didn't cop who he was
Next Page