"Misadventure" verdict overturned in relation to death of Nóra Quoirin

A Malaysian court has overturned a verdict of "misadventure" in regards to the death of Nóra Quoirin.

The body of the 15-year-old Nóra was discovered following her disappearance near Kuala Lumpur in 2019. 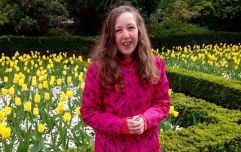 END_OF_DOCUMENT_TOKEN_TO_BE_REPLACED

In January, a coroner handed down a ruling of misadventure, indicating her death was accidental, and stated no one else was involved.

However Nora's family have always insisted that there is no way she would have wandered away from their holiday accommodation unless she was lured outside.

The Quoirin family have always believed that Nóra was abducted, something that may now be looked into further.

Nora's case has now been changed from 'misadventure to an 'open' ruling.

Girls With Goals || Her · Ep.161: Feeling Peachy - Sharon Keegan of Peachylean on being an absolute BOSS!
popular
Jennifer Lopez just shared a steamy snap of herself and Ben Affleck – and WOW
Emilia Clarke is set to be the next Marvel superhero
Here is why you should always take a picture of your oven before you go on holidays
Sunburned? Eating these 5 foods will help your skin heal from within
Bride dislocates her leg during her first dance in viral clip
The sad reason why viral gymnast, Katelyn Ohashi, isn't on the USA Olympic team
Jennifer Lopez and Ben Affleck just became Instagram official
You may also like
1 year ago
Nóra Quoirin's parents will be on The Late Late Show this week
1 year ago
Nóra Quoirin's funeral to take place in Belfast next week
1 year ago
Nora Quoirin's family calls for relatives and others to stop making 'unhelpful' comments
1 year ago
Malaysian police say that Nóra Quoirin died from hunger and stress
1 year ago
Nóra Quoirin's parents 'heartbroken' by death of daughter in Malaysia
1 year ago
Breaking: Body found in search for missing Nóra Quoirin
Next Page