It has been over a month since the tragic deaths of five family members when their car slipped into Lough Swilly off Buncrana pier.

Five members of the same family perished in the tragedy, with the sole survivor being baby Rioghnach Ann, rescued by footballer Davitt Walsh from the sinking car. 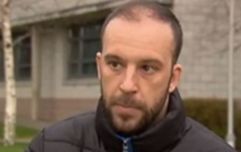 'I have the utmost respect for Stephanie': Davitt Walsh speaks on ex-girlfriend's claim

END_OF_DOCUMENT_TOKEN_TO_BE_REPLACED

Louise James, mother of Rioghnach-Ann, Mark and Evan, who also lost her husband, mother and sister in the tragedy teamed up with the man who saved her infant daughter in a special way today.

James and Walsh, along with 100 other volunteers ran the Belfast City Marathon today, in memory of Evan who suffered from muscular dystrophy.

According to Belfast Live, Louise stated:

“I want to thank every single person who took part to remember Evan, whether you ran the race or have put your hand in your pocket to donate. You did something remarkable in his name and to celebrate his life. I know he would be proud."

What a beautiful gesture and display of strength.

popular
Family of four found dead in hotel sauna
"Real-life consequences": Strictly's Adam Peaty addresses near-kiss rumours
Little Mix's Leigh Anne Pinnock addresses haters in tearful speech at 30th birthday party
It looks like it's all over between Maura Higgins and Giovanni Pernice
Here's what happens on every day of your menstrual cycle (roughly)
Apparently, THIS is the reason why Louise Redknapp split from Jamie Redknapp
Someone has ranked the penis size of men from all over the world
You may also like
5 years ago
Davitt Walsh, the hero of the Buncrana tragedy has been awarded a medal for bravery
5 years ago
Buncrana hero promises to teach rescued baby to swim
5 years ago
Man rescued after incident at Buncrana Pier
5 years ago
PIC - Buncrana tragedy hero Davitt Walsh has made his return to football
5 years ago
Buncrana Tragedy Mum Louise Is Teaming Up With Hero Davitt Walsh In An Amazing Way
5 years ago
WATCH - Dublin And Donegal GAA Fans Paid Tribute To The Buncrana Tragedy Victims Today
Next Page