25 further deaths and 365 new cases of coronavirus have been confirmed in the Republic of Ireland.

The latest figures were released on Wednesday evening.

13 of the deaths were located in the east of the country, 8 in the north, 2 in the south and 2 in the west.

18 people were reported as having underlying health conditions.
There have now been 235 COVID-19 related deaths in the Republic of Ireland, while the total number of confirmed cases stands at 6,074.

·13 deaths located in east, 8 in north, 2 in south, 2 in west
·the people included 10 females and 15 males
·the median age of today’s reported deaths is 80
·18 people were reported as having underlying health conditions

There have now been 235 #COVID19 related deaths in Ireland.

The HPSC has been informed of 365 new confirmed cases of #COVID19 in Ireland as at 1pm 8th April. 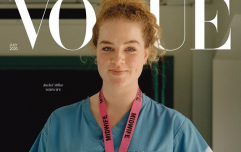 END_OF_DOCUMENT_TOKEN_TO_BE_REPLACED

The HSE is now working to identify any contacts that the patients may have ha to provide them with information and advice to prevent further spread.

The news comes as Gardaí have set up checkpoints on major roads across the country to stop Easter travel.

Operation Fanacht will be in place from noon on Wednesday (April 8) until Monday night (April 13), and will see 2,500 Gardaí working at checkpoints at any time.

In a press conference on Wednesday morning, Commissioner Drew Harris announced that permanent checkpoints were being erected on major roads across the country, saying: "We are sending a clear message, if you're travelling outside the two kilometre limit unnecessarily, you will be turned back."

popular
Gwen Stefani reportedly pregnant with baby number four
After days of silence, Scott and Sofia finally comment on the break up rumours
Remember Christian From Clueless? This Is What He Looks Like Now
These sustainable Irish sweaters are making people smile, and they're back in stock tonight!
Here's what happens on every day of your menstrual cycle (roughly)
Someone has ranked the penis size of men from all over the world
So, William and Harry have a step sister... and who knew?
You may also like
1 day ago
#Covid-19: People should limit themselves to one sexual partner, says Dr Holohan
2 days ago
#PleaseSpeakUp: Face masks proving challenging for people who are hard of hearing
1 week ago
#Covid-19: Coping with anxiety and stress if you've lost your job
1 week ago
Women and girls struggling with access to period products during #Covid-19, research shows
1 week ago
Lockdown birthdays: 6 ideas for throwing a socially distant celebration
1 week ago
'Living a nightmare': Andrea Bocelli recalls battling #Covid-19 with family
Next Page