Cristiano Ronaldo is one of the most talented athletes to have ever graced a football pitch.

The Portuguese captain has won the Ballon d'Or three times in addition to his three Champions League winners' medals and would no doubt have more if he played in a generation that didn't include Lionel Messi and his ridiculous left foot.

By all accounts, he should be adored by fans around the globe, as he regularly makes time for them, even when they're looking for a selfie after running onto the pitch.

But despite all of that, the Real Madrid forward still rubs people the wrong way, largely due to the fact he is seen as a vain character who prioritises himself over his team-mates. 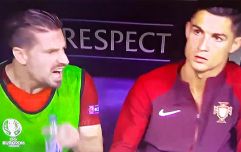 END_OF_DOCUMENT_TOKEN_TO_BE_REPLACED

Ronaldo has shouldered most of the blame for Portugal's inability to get going properly at Euro 2016, having drawn both of their opening games against Iceland and Austria.

Late in the Austria game, with the scores level at 0-0 in the dying minutes, Ronaldo struck the post with a penalty and kept his side winless in the tournament.

Unsurprisingly, ahead of Wednesday's final Group F game against Hungary, Ronaldo was clearly not in the mood for interviews. As a reporter approached him looking for some choice words, Ronaldo sent a rather clear message by taking the reporter's microphone and chucking it into a nearby lake.

Ronaldo’s not really helped himself in these Euros, has he? Throwing a reporters microphone into a lake. pic.twitter.com/cCMwaIhVPJ

popular
A documentary about two Irish boys who skipped school to go to New York is coming soon
Ben Foden explains why he called Rachel Stevens "sexiest woman alive"
And Just Like That... episode 8: Nobody saw this one coming
Special mass to be held for Urantsetseg Tserendorj's anniversary
These are the top baby names for 2022
Here’s how you can get all the essentials for your newborn at a fraction of the cost
Ben Foden's wife Jackie says it is "not possible" for him to cheat on her
You may also like
5 years ago
Here's what Ireland's top Google searches were this year
5 years ago
Everyone is melting over how these kids reacted to Cristiano Ronaldo
5 years ago
EXCLUSIVE interview with Ronaldo's moth
5 years ago
People are angry with France for 'stealing' Iceland's trademark clap
5 years ago
Welsh fans give the Irish a run for their money as they sing their hearts out after Euro 2016 exit
5 years ago
Everyone in Wales is due a free beer today...no, seriously
Next Page