Delaware elects first openly trans woman to the US Senate

As voting in the US election rumbles on this morning, there are celebrations underway in Delaware as a 30-year-old LGBTQ+ activist becomes the first-ever openly trans woman elected to the US Senate.

Sarah McBride has made history as the first trans woman elected to Delaware's state senate. Speaking to Buzzfeed news just moments after her win Sarah said she "hopes her achievement as the first-ever openly trans state senator will encourage other young LGBTQ people to follow their dreams."

I hope tonight shows an LGBTQ kid that our democracy is big enough for them, too. 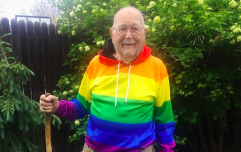 90-year-old grandfather comes out as gay in viral post and inspires millions!

END_OF_DOCUMENT_TOKEN_TO_BE_REPLACED

McBride, a former White House intern under the Obama administration, came out during her tenure as president of the student body president of the American University in Washington, DC, in 2012. When she is sworn is she will become the highest-ranking transgender elected official in the United States.

We did it. We won the general election.

Meanwhile in the race for the White House it's too close to call as election officials in key swing states continue to count valid ballots. The process could continue for days as the US counts an unprecedented number of absentee ballots.