When it comes to radio gigs it doesn't get much bigger than a morning slot with the national broadcaster.

That's why serious congratulations are in order for Doireann Garrihy and Eoghan McDermott.

The pair have just been announced as the hosts of a new breakfast show on RTÉ 2FM.

"Rise and Shine, it’s breakfast radio tzime," wrote Doireann on Twitter as she shared the news.

Eoghan tweeted that he was "excited to be heading back to the pure craic side of radio" and that "making mischief and laughs" would be their main priority.

Doireann made her name in radio on Dublin's Spin 1038, first as an entertainment correspondent and then as co-host of evening show The Zoo Crew alongside Martin Guilfoyle.

“Doireann is someone we have been looking at for a couple of years," head of 2FM Dan Healy told the Irish Mirror.

“We target these younger audiences and she has an enormous profile and is a content creator for those (people).

“And we think she will do an enormous job for us in terms of maybe bringing younger audiences to our breakfast show."

Eoghan has been a 2FM favourite for a number of years with his own drive time show. 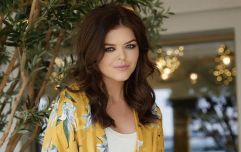 END_OF_DOCUMENT_TOKEN_TO_BE_REPLACED

Host Keith Walsh is set to move to weekends on 2FM with his own show.

Jenny Greene is meanwhile set to return to the station as the host of the drive-time show on weekday evenings.

popular
Hilary Swank, 48, reveals she is pregnant, expecting twins
So apparently George and Mollie from Love Island aren't actually step siblings
Davide Sanclimenti opens up on having kids with Ekin-Su Cülcüloğlu as he turns down Dancing On Ice
Lush to open its biggest Irish store this winter
Angelina Jolie accuses ex-husband Brad Pitt of abuse
People are being warned not to dress as Jeffrey Dahmer for Halloween
It looks like Ireland could get a white Christmas this year
You may also like
2 months ago
Laura Whitmore quits radio show after four-year run
6 months ago
Louise McSharry reveals new radio gig after leaving 2FM
7 months ago
Today FM's Pamela Joyce in tears after trolls send abusive letter
8 months ago
91-year-old Irishman is one of the oldest DJs spinning on UK radio
9 months ago
Vogue Williams quits her Sunday morning radio show
1 year ago
Women don't naturally orgasm... so says this all-male radio show
Next Page