Drop all-white dress code at Wimbledon for players who are menstruating, urge protestors

A group of protestors were making their views heard outside Wimbledon's main gate yesterday, before the women's final between Ons Jabeur and Elena Rybakina.

The campaigners were urging the powers behind the iconic tennis tournament to drop the strict all-white dress code – over the stress and worry it puts on female players who might be having their period during the tournament.

Gabriella Holmes and Holly Gordon, both in their 20s and active in sports, spoke to the Guardian during the protest – and explained that they had decided to come there to highlight the anxiety that women face when competing in traditional whites.

Challenges of playing sports while menstruating

END_OF_DOCUMENT_TOKEN_TO_BE_REPLACED

Holmes, who plays tennis herself, explained that the two friends had previously spoken about how it can be challenging to play sports when you have your period, and that this might just be one of the reasons so many girls end up quitting sports when they reach puberty – a trend not seen to the same degree among boys.

Wimbledon's strict all-white dress code is outdated, the women feel, and they pointed out the 2007 incident where French player Tatiana Golovin wore red shorts under her skirt at the tournament – sparking a media frenzy.

END_OF_DOCUMENT_TOKEN_TO_BE_REPLACED

“You can uphold tradition and still move with the times. There’s no point upholding tradition just for tradition’s sake,” Holmes said.

“They have got more strict over the years. Actually, often the dress code has become stricter as a reaction to players wearing different things. We don’t want to go back. We want them to move with the times.” 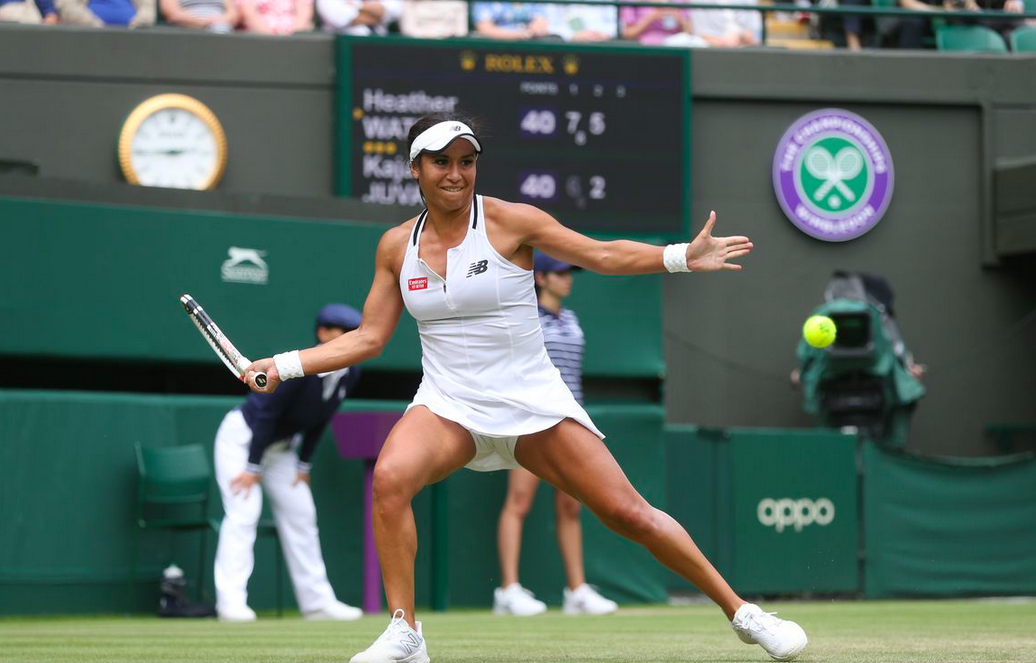 END_OF_DOCUMENT_TOKEN_TO_BE_REPLACED

Holding up banners with slogans including “About bloody time” and “Address the dress code” the girls and the crowd gathered agree it's time for a change.

“The conversation around women’s sport, in general, is becoming bigger so this conversation shouldn’t really come as a surprise," Gordon points out.

"We’re not hoping to drastically change the all-white dress code we just want to kind of amend it and keep in mind the practicality for women instead of keeping up traditions essentially for tradition’s sake."

She added: “We ultimately want it to be the women’s choice about what would actually alleviate any stress or shame when it comes to competing professionally in front of the world.”

One option, the girls argue, would be to allow women to choose to wear Wimbledon’s colours of purple and green as an option for undershorts.

“We’ve come down today because we want Wimbledon to address the white dress code that doesn’t take into consideration female athletes on their periods,” Holmes continued.

“We want to make it really known to Wimbledon that the rules they are making at the top, they’re all already filtering down to grassroots levels. We are already seeing tons of young girls who drop out of sports when they start their period or by the time they’ve hit puberty they’ve stopped sports altogether."

She adds: “We think it’s the time to address those barriers for young girls getting into the sport and it starts at the top, so that’s Wimbledon. We want women to be able to focus on the tennis and on the sport and not have to worry about other factors when competing at this level.”

A Wimbledon spokesperson had the following to say after the protest:

“Prioritising women’s health and supporting players based on their individual needs is very important to us, and we are in discussions with the WTA, with manufacturers and with the medical teams about the ways in which we can do that.”

popular
Vogue Williams slams man who refused to swap seats with her on plane
New Zealand family find two bodies in second hand suitcases
Crown Paints advert receives 200 complaints over 'misogyny' and 'everyday sexism'
Are we getting a mini heatwave in September?
Scarlett Moffatt slams 'disgusting' pap for sneaking into hotel to take photos of her
Adam Collard allegedly attacked on night out with Paige Thorne
This is why the world is obsessing over Adidas Gazelles
You may also like
1 week ago
Actress Anne Heche in coma following car crash
1 week ago
The cost-of-living crisis is having a disproportionate impact on women, charity warns
2 weeks ago
Government approves new standalone stalking offence Bill
2 weeks ago
Man involved in Lady Gaga dog-walker robbery jailed for 4 years
2 weeks ago
Archie Battersbee's life support treatment to end at 2pm tomorrow
2 weeks ago
Shakira could face 8 years in prison over tax fraud
Next Page