More transport mayhem is in the offing.

SIPTU workers at Dublin Bus have voted to go on strike in solidarity with staff at Bus Éireann, as the long running dispute involving Ireland's public transport system shows no sign of conclusion.

The date, or dates, of Dublin Bus strike action are not yet known. 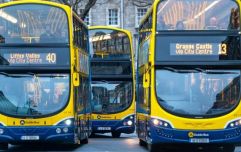 END_OF_DOCUMENT_TOKEN_TO_BE_REPLACED

SIPTU members in Dublin Bus have voted in favour of taking industrial action in support of their colleagues currently in dispute in Bus Éireann in a ballot counted in Liberty Hall, Dublin 1, today (Thursday, 13th April).

SIPTU Organiser, John Murphy, said: “The ballot count has been completed and the majority of SIPTU members in Dublin Bus have voted to take industrial action in support of, and in sympathy with, their colleagues in Bus Éireann. Most SIPTU members in Dublin Bus are bus drivers and this grade voted by 67% to 33% in favour of taking industrial action.”

He added: “SIPTU representatives will now liaise with our colleagues involved in that dispute to discuss when to serve the necessary notice on industrial action on the management of Dublin Bus.”

popular
Terrie McEvoy responds to trolls who commented on her pregnancy weight
Ariana Grande just dropped a breakup song about Pete Davidson AND Mac Miller
Derry Girls star speaks out after show called "distinctively British"
Forget Making a Murderer, This Crime Documentary is Finally on Netflix
Police release bodycam footage of missing YouTuber Gabby Petito
The 'secret' Zara label signs that'll apparently help you get the right size every time
Gwen Stefani reportedly pregnant with baby number four
You may also like
2 years ago
Here are all the Dublin Bus routes that are diverted due to the closure of College Green
2 years ago
Dublin Bus is getting a 24-hour bus service which will include stops at Dublin Airport
2 years ago
Gardaí are looking for witnesses after an incident on board a Dublin Bus
2 years ago
A Dublin Bus driver suffered a heart attack while on duty this morning
2 years ago
Some of us are using our Leap card all wrong! Here are 4 ways to make sure you're saving
2 years ago
You can now buy a Dublin Bus... and we have a few ideas of what we'd do with it
Next Page