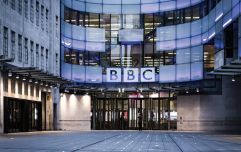 END_OF_DOCUMENT_TOKEN_TO_BE_REPLACED

popular
Bride asks for divorce day after wedding following groom's disrespectful cake stunt
Head of dive squad searching for Nicola Bulley thinks 'something's not right'
These are the most popular names for babies born in February
Here's why Nicola Peltz-Beckham's family are suing her wedding planners
Police believe they know what happened to missing dog walker Nicola Bulley
Couple decide to live on cruise ship permanently after finding it's cheaper than paying mortgage
Man sues friend for £1.9m after she refused to be his girlfriend
You may also like
4 years ago
‘More than 60 percent of Irish women are employed yet they face significant challenges'
4 years ago
The one question you should avoid answering at all costs in an interview
4 years ago
The diagram that shows how little women speak in Oscar-winning movies
5 years ago
E! News exec claims Catt Sadler's pay had nothing to do with gender
5 years ago
Iceland just made it illegal to pay women less than men
5 years ago
Catt Sadler quits E! News because of HUGE pay disparity with co-host
Next Page