Police in the UK have launched an appeal to find Linzi Davis and her eight-year-old son River Bain, who were last seen on Friday near a train station in the Scottish Highlands.

The mother and son from Auldearn, a village situated close to Nairn train station where the pair were last spotted, have not been in contact with family or friends and police say they are now "anxious" to find them,

"Officers would appeal directly to Ms Davis to make contact by phoning 101 or via any police officer or police station." 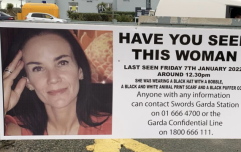 END_OF_DOCUMENT_TOKEN_TO_BE_REPLACED

Linzi Davis (36) is described as being 5ft 2in, of medium build and has dark brown hair worn in a side parting. Ms. Davis has distinctive tattoos on the top of her right arm and along her collar bone. Linzi's son River Bain (8) is described as slim with short dark hair. It is not known what they were wearing when the they were last seen.

Officers say the mother and son may have travelled to Edinburgh using public transport but they are also looking at links the pair have in Nairn, Inverness and Forres.

popular
A celebrity hairstylist just shared a genius hack for the perfect messy bun
16 and Pregnant star Jordan Cashmyer dies aged 26
Here are all the Instagram accounts of the stars of Netflix's Cheer
Irish in Sydney shaken by Ashling Murphy murder
Here is everything we know about the Desperate Housewives reboot
Coming to terms with the fact that you're a Charlotte
Dancing on Ice professional Sean Rice dies at 49
You may also like
1 week ago
New Maddie McCann doc 'to reveal fresh info' about prime suspect
2 weeks ago
US police investigating as child last seen two years ago only reported missing last week
1 month ago
Kathleen Moore: Body of missing woman found near boyfriend's home in US
3 months ago
Dog the Bounty Hunter joins hunt for missing Brian Laundrie
3 months ago
New 911 call claims Brian Laundrie 'slapped' and 'hit' Gabby Petito
9 months ago
Mum of missing teenager told "we can’t find your son if you can’t" by UK police
Next Page