Time to wrap up.

Of all the things going on in 2020 we haven't seen a polar-air mass just yet so, right on cue, Met Éireann (and God playing his tricks it would seem) have decided it's exactly what we need*.

A cold air system is heading straight for Ireland and will bring some odd weather along with it. Although it will be mainly bright with good sunny spells for the remainder of the week, Met Éireann are also predicting overnight lows of -1 degrees with frost forming in places.

So what exactly is a polar air-mass and what strange conditions will it bring? Well, Met Éireann can explain that better than me:

A cold polar maritime air-mass lies over Ireland. The chart shows temperatures below -32C at around 5.5km above the surface. As this very cold air overruns the relatively warm seas, deep convection has formed, bringing some heavy showers this morning & hail & lightning in places pic.twitter.com/VXnXzjZ7bU

Yes folks, we can expect cold air, heavy showers, potentially hail, and even lightening in places as a result of this air-mass.

Here's a look at the 7 day Atlantic Chart:

Our 7 day Atlantic Chart shows the precipitation and pressure forecast in 6 hour intervalshttps://t.co/9Giuj4CR5m

A nationwide forecast and outlook covering the next week can be found here. https://t.co/9gKN6SVok4 pic.twitter.com/7XRzUg0ba7 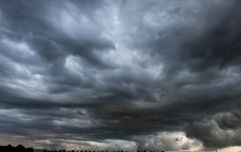 END_OF_DOCUMENT_TOKEN_TO_BE_REPLACED

On Thursday night we'll see "a mix of cloud and clear spells. Lowest temperatures of -1 to +3 degrees generally with frost forming, but less cold where low cloud, mist and fog prevail."

So yeah, it's getting cold but also after the year we've had... bring it on.

*We are fully aware that Met Éireann in no way selects the weather.