September is expected to be hotter than normal.

The sun may have set on our August heatwave, and while the weather's been grey and cloudy of late, it doesn't necessarily mean that autumn is just around the corner.

According to Met Éireann, current indications suggest that September will be warmer and drier than average, so maybe don't put the factor 50 away just yet.

END_OF_DOCUMENT_TOKEN_TO_BE_REPLACED

Between 26 August and 1 September, high pressure will return to Ireland, bringing "more settled" weather, as well as "drier than normal conditions in all areas". Temperatures will also rise slightly.

The following week (2 September - 8 September) we'll see "more changeable" weather, due to the arrival of low pressure once more. Temperatures, however, will remain above average for September, though we can also expect "above normal precipitation" in most areas.

Temperatures will continue to be slightly above the norm come mid September, but it's also set to be "unsettled" and with plenty of rain. In fact, Met Éireann has said that some "rainfall warnings" may be required. 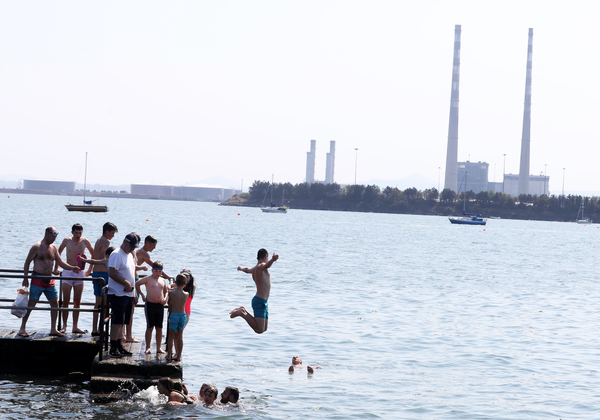 END_OF_DOCUMENT_TOKEN_TO_BE_REPLACED

So while we're not exactly getting a heatwave next month, we can still expect plenty of warm weather.

Earlier this week, parts of Ireland were battered by thunderstorms, with Co. Wexford experiencing severe flood damage in parts.

Tomorrow will get off to a "dull and damp start", with outbreaks of rain and drizzle throughout the day, which may get heavy in the south and southeast. These showers are expected to clear as the day goes on, with sunny spells forming in the evening. Highest temperatures will be between 17 and 21 degrees.

END_OF_DOCUMENT_TOKEN_TO_BE_REPLACED

On Friday, we can expect some "good sunny spells" as well as some "scattered showers", which will become more frequent in the north of the country. Highest temperatures will be between 15 and 18 degrees.

popular
Baby dies next to mother who drank 'two or three' bottles of wine then fell asleep
S Club 7's Hannah Spearritt and children left homeless after being forced from home before Christmas
Woman dies four days after proposal after using wrong spoon to stir tea
Clarins opens its first spa in Ireland (and the UK) on one of Dublin's busiest streets
"I feel like I lost myself": Nathalie Lennon on her mental health struggles and her latest project with Pieta
Irish pizzeria given perfect score by top food reviewer
Naked Attraction host left speechless after seeing contestant with 'world's biggest penis'
You may also like
3 weeks ago
Ireland set to ban "cruel process" of conversion therapy
3 weeks ago
Brutal details emerge in Bruna Fonseca investigation
1 month ago
29 puppies rescued from illegal trafficking at Belfast Port
1 month ago
Status Orange low temperature weather warning in effect for today
1 month ago
Gardaí issue new appeal in Sophie Toscan du Plantier case
1 month ago
Low temperature weather warning extended until Friday
Next Page