'Be a good citizen and do it for Ireland': Ryan Tubridy gives inspirational speech on Late Late Show

"Be a good citizen and do it for Ireland."

The Late Late Show has long tackled serious themed amongst its offering of light Friday evening entertainment, but last night's episode was different.

Host Ryan Tubridy opened RTÉ's flagship show by introducing it as "The single most peculiar, most profound and possibly the most pressing Late Late Show that we've ever broadcast. I've never experienced anything quite like it." 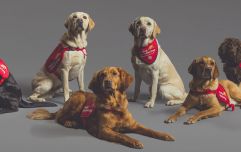 END_OF_DOCUMENT_TOKEN_TO_BE_REPLACED

The show was conducted without any audience and any house band, measures that Tubridy said were "absolutely necessary."

"You will do all of this for your children, do it for your parents. For our neighbours, for our friends, do it for somebody you might even like in college or the person who sells you your coffee every morning, it doesn't really matter. Just be a good citizen and do it for Ireland. That's the plea, today.

Later in the episode, Tubridy was joined on the set of Fair City by Dr. Sarah Doyle for a demonstration of how to self-isolate should their lives be touched by COVID-19.

Doyle advised that people don't take visitors while someone in the house is self-isolating, and said it was crucial to avoid associating any stigma with the illness, as "many, many of us are going to get it."

"There is no shame in having somebody with Covid-19"

Dr Sarah Doyle discusses self-isolation with Ryan and why we shouldn't be ashamed if it lands at our door. #LateLate pic.twitter.com/pf9Kds33yA

popular
Enchanted sequel: New pictures from the Enniskerry set as filming gets underway
The DIY frozen coffee recipe that's so delicious you'll never pay for an iced latte again
10 problems every student faces in first year
QUIZ: Match the Friends quote with the character who said it
Author Lucinda Riley's family announces she has died aged 56 after 'secret' cancer battle
Drunken strawberries is the surprising summer treat we all need in our lives
Pharmacies to give Covid vaccines from this week
You may also like
1 month ago
Taoiseach Michéal Martin "can never be definitive" that Ireland won't face another lockdown by winter
1 month ago
Taoiseach Micheál Martin says hotels across Ireland could reopen by June
2 months ago
Slane Castle set to host a "double summer concert" next year
2 months ago
GP couple postponed their wedding so they could administer Covid-19 vaccines
2 months ago
Dr. Alex announces break from frontline work to focus on his mental health
2 months ago
Banksy's Covid painting for NHS charity sells for £14.4m
Next Page