In a series of tweets called "stormwatch", the travel service has issued the following...

Services to Dundalk/Drogheda and Belfast are currently suspended.

Stormwatch Update: Services to Dundalk/Drogheda and Belfast currently suspended due to a tree blocking the line at Donabate. Services into Dublin City centre are unaffected. A crew is on their way to remove the tree. Update to follow

Waterford to Heuston line is operating at a reduced speed.

Stormwatch Update: 06:00hrs Waterford Heuston has struck a tree, Train will continue, but will be operating at a reduced speed as a result #stormcallum

Some lines have re-opened following issues this morning.

Stormwatch Update: Services have resumed between Howth & Howth Jct, Debris has been removed from the line at Bayside #Stormacallum

You can read live information on all services here. 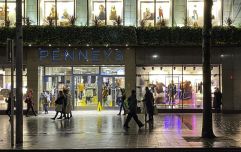 Queues since 5am as Penneys and other retailers open up again

END_OF_DOCUMENT_TOKEN_TO_BE_REPLACED

According to reports from the RTÉ, The National Emergency Co-ordination Group is due to meet at around 9am to assess the situation.

Met Eireann announced that weather warnings for the west and northwest coast would remain in place today until 5pm.

Girls With Goals || Her · Ep.151: 'A Story Shared' - Aoife P. Rafter on blogging during a pandemic and living with CF
popular
The son in The Undoing is the real life child of Corrie star Katy Cavanagh
'I loved it': The childhood drug addiction that inspired The Queen's Gambit
24 hour Penneys: Here's what you need to know about the store's reopening
Here's what happens on every day of your menstrual cycle (roughly)
Met Éireann issue "severe" 55-hour weather advisory
A new Krispy Kreme store is opening up in Dublin city centre
Rosanna Davison: "It feels like the biggest miracle after our fertility struggles"
You may also like
1 day ago
Joe Biden announces all-female senior White House press team
1 day ago
Trump tells Biden "get well soon" as president-elect fractures foot while playing with dog
2 days ago
24 hour Penneys: Here's what you need to know about the store's reopening
1 week ago
Campaign to highlight "sheer scale" of sexual violence in Ireland
1 week ago
Students in Carlow school told wearing tight PE clothes "distracting" for staff
1 week ago
Hope Over Silence: Pieta House encourages people to reach out this Christmas
Next Page