Irishman facing deportation from America has been "jailed without warning"

A Cork man was arrested by ICE officers in America on Wednesday, 10 July.

An Irishman has been imprisoned in the US “without warning” by immigration officials is being treated like a criminal, his wife has said.

Reports emerged on Sunday of the arrest of a man who has spent almost 10 years working to secure his citizenship in Philadelphia.

Keith Byrne, from Fermoy in Cork, was arrested by Immigration and Customs Enforcement (ICE) officers on Wednesday, 10 July.

According to RTÉ, the married father-of-three has been living in the US for 12 years and runs a painting business over there.

Since marrying his American wife in 2009, they have been in the process of adjusting his status, but have been met with regular refusals.

https://t.co/SMUlZJEaq5. #helpkb My uncle Keith byrne is one of the most caring and loving people I know he dosent deserve this he has worked to hard he a loving step father a father and a husband please help my uncle by sending a donation 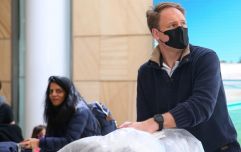 Man being treated for suspected case of coronavirus in Belfast

END_OF_DOCUMENT_TOKEN_TO_BE_REPLACED

The most recent refusal came earlier this year but Mrs Byrne said they had "no intention of accepting that".

Byrne was previously convicted in Ireland on a minor drugs possession charge, which Mrs Byrne believes is the reason his applications to remain in the country have been denied.

She said he has been extremely honest about his previous conviction, and "that's why they could find him so easily, we weren't hiding him".

A major ICE deportation raid was due to start this weekend, with ICE agents reportedly targeting 2,000 immigrants for deportation across 10 major cities.

The raid could also sweep up immigrants who aren’t the initial targets.


popular
Say hello to the €19 Penneys skirt that will go with everything in your wardrobe
Met Éireann state that three days of snow, hail, and sleet is coming for parts of Ireland
RUN! The €16 floral Penneys dress that fits like a dream is in stores now
Grey's Anatomy's Richard Flood says 'things got a bit scary' after leaving Red Rock
The €30 Penneys jumpsuit that could pass for a designer piece is in stores now... RUN!
WATCH: Jennifer Aniston surprises Friends fans at Central Perk
Say hello to the €45 ASOS dress you're going to want in your wardrobe for spring
You may also like
2 days ago
Met Éireann says there's a risk of snow for parts of Ireland over the weekend
5 days ago
Gardaí warn of phone scam that could cost consumers a "small fortune"
1 week ago
Met Éireann has issued an ice and low temperature warning for 17 counties
1 week ago
HSE issues warning after a large increase in mumps cases
1 week ago
A homeless woman in her 20s has died in a Dublin hostel
1 week ago
Eoghan Murphy "saddened" by serious injuries to homeless man, removes campaign posters from scene
Next Page