There has been widespread anger after the body of a horse was discovered abandoned on a residential Cork street.

The animal had been "raced to death" pulling a sulky cart and was then discarded. The incident occurred last week but further photographs have begun to emerge now.

END_OF_DOCUMENT_TOKEN_TO_BE_REPLACED

The ISPCA has furthermore renewed its appeal for information and is still looking to speak to the owners of the horse.

"The group who were racing unhitched the cart after the horse collapsed then walked away laughing, according to witnesses," reports Metro.co.uk.

A JCB was later needed to remove the animal.

Sadly, ISPCA inspector Lisa O’Donovan said this is not an isolated incident. "It is not acceptable that you have young kids going out there driving a horse into the ground and then just walking away," she stated. 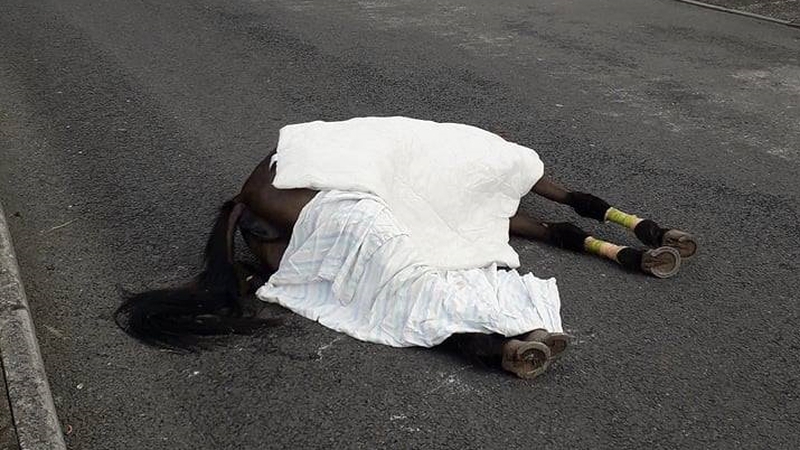 END_OF_DOCUMENT_TOKEN_TO_BE_REPLACED

"A few people said to me that they were laughing as they went which I think is even more horrifying. There is no remorse, guilt. The horse is of no more value to them than anything else," Lisa also stated.

And Sinn Féin councillor Ken O’Flynn commented: "I have deep concern and frustration regarding the treatment of horses in the Northside of Cork City.

"Those responsible for animal cruelty must be punished and made an example of a letter of the law."

Clanbrassil St just now. After the injury abandoning and eventual death of a horse on Cork St this week such dangerous activity in the city MUST stop. @GardaTraffic pic.twitter.com/7qHXE3MBaO

"This is a very distressing incident and we understand a lot of children would have been around at the time and may have come upon the poor animal as it lay dying on the road," a Garda source told The Irish Times.

"We are certainly treating it very seriously and want to hear from anyone who can help us investigate what is a truly an appalling and shocking case of animal cruelty."

Last year Cork Council had to put down a total of 27 horses. Seven have been euthanised so far in 2018.

popular
Celine Dion, 54, diagnosed with incurable neurological disease
Fans are feeling seriously sorry for Molly Mae Hague after resurfaced interview
HSE advises children with sore throat, cough and fever should stay at home
Here are our top picks from this week's Lidl Toy Event
Maura Higgins claims she was left by designer who went to style someone else at an award show
He may be a politician, but Leo Varadkar's personal life is none of our business
Father took daughter to hospital three times before she died of Strep A
You may also like
1 week ago
Rules around blood donation have changed in Ireland as of today
3 weeks ago
Iranian actress Taraneh Alidoosti removes headscarf in social media post
4 weeks ago
Government's five-day domestic violence leave plan criticised
2 months ago
Meteor shower to be visible over Ireland tomorrow
2 months ago
Tayto Park has been renamed Emerald Park
2 months ago
Gardaí investigation underway as baby skeletal remains found in Cork
Next Page