Kanye West deletes all of his Donald Trump tweets

Not so long ago it seemed that President Trump (President-elect, as it were then) had a supporter in the form of Kanye West.

West took plenty of flak for meeting up with Trump at his imaginatively named Trump Tower in New York and later explained via tweet that his intention had been to meet 'to discuss multicultural issues'.

'I feel it is important to have a direct line of communication with our future President if we truly want change,' he'd tweeted, also fuelling speculation that he fancied himself as a future Leader of the Free World by adding '#2024' in a separate tweet. 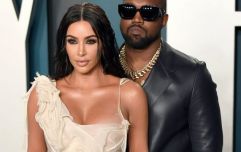 It's over: Kim Kardashian files for divorce from Kanye West after seven years of marriage

END_OF_DOCUMENT_TOKEN_TO_BE_REPLACED

Now though, it appears Kanye's Trump-related tweets have been deleted. A quick scan through his Twitter feed reveals they're nowhere to be seen with reports also surfacing that the rapper is not too impressed by Trump's early weeks in the Oval Office.

TMZ report that West has has broken ties with the president, with a source telling them that his recent attempts to ban Muslims from entering the country along with other events prompting Kanye to withdraw his support for him.

We can safely assume this won't be the last we hear about this particularly story. We'll be keeping an eye on @realDonaldTrump's Twitter account in the days ahead.

popular
Omicron variant symptoms are mild so far, says doctor who discovered it
Vicky Phelan says terminally ill people should have right to decide how to die
The internet is saying the same thing after Ryan's Toy Show opening
Strictly's Giovanni Pernice responds to dating rumours following split from Maura Higgins
The best memes from this year's Late Late Toy Show
8 of the hottest make-up trends to try this festive season
We finally know what happened to Sam in And Just Like That
You may also like
1 month ago
Kanye West legally changes his name to Ye
2 months ago
Peppa Pig's album has better reviews than Kanye's latest release
5 months ago
Kim Kardashian has us very confused by her birthday message to Kanye
5 months ago
Kim Kardashian reveals the reason she is divorcing Kanye West
5 months ago
Kim Kardashian is getting a new reality show all about her divorce from Kanye
1 year ago
Kanye West presents Kim Kardashian West with hologram of her late father as birthday gift
Next Page