"That's a social disaster that people who are working hard and have decent incomes can't afford to buy a home."

Tánaiste Leo Varadkar has responded to President Michael D Higgins' recent comments about housing, saying he will not criticism them because "some of what he said was true".

President Higgins referred to Ireland's housing issue as "our great, great failure" during a speech in Co Kildare on Tuesday. 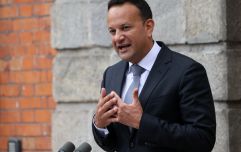 END_OF_DOCUMENT_TOKEN_TO_BE_REPLACED

Varadkar said that, while the current Government is not responsible for the financial crash or housing situation, the issue is a "social disaster".

Speaking on Newstalk, he said: "You know a couple, both of whom have decent jobs, are unable to afford a home, and that wasn't the case for most of our history, to me that's a social disaster that people who are working hard and have decent incomes can't afford to buy a home.

"Many are so frustrated at that, they're even willing to turn to populism, nationalism, and euroscepticism as a solution, in that scenario they lose their job as well as a house, but that is a disaster in my view."

On Tuesday, attending a facility run by Tiglin, a charity helping people overcome addiction and homelessness, at Jigginstown Manor in Naas, Kildare, the President had said:

END_OF_DOCUMENT_TOKEN_TO_BE_REPLACED

"I often ask myself, you know, how republican is what we’ve created? And isn’t it sometimes very much closer to the poor law system that we thought we were departing from?

"That's a real challenge. I have taken as well to speaking ever more frankly in relation to housing because I think it is our great, great, great failure.

"It isn’t a crisis anymore, it is a disaster."

He added that Ireland has to "really think about" meeting the basic needs of its people, listing food, shelter and education as examples.

"Building homes is what is important, it is not to be a star performer for the speculative sector internationally or anything else."

popular
Vogue Williams slams man who refused to swap seats with her on plane
This is the exact date the weather will get warm again
New Zealand family find two bodies in second hand suitcases
Mum charged with murder after allegedly leaving baby in hot car
Crown Paints advert receives 200 complaints over 'misogyny' and 'everyday sexism'
Are we getting a mini heatwave in September?
Joe Swash helps 95-year-old woman and carries her to hospital
You may also like
1 month ago
"Role model" – Leo Varadkar hails Leinster's Nick McCarthy for coming out
3 months ago
Twitter reacts to Leo Varadkar's super organised fridge
4 months ago
Tánaiste Leo Varadkar condemns homophobic attack in Dublin City Centre
4 months ago
9 new symptoms of Covid-19 officially listed by UK
4 months ago
New law will see workers entitled to 10 paid sick days
4 months ago
Irish employers urged to consider reintroducing mask wearing and working from home
Next Page