The cause of the blaze is not known at this stage

Around a hundred firefighters are currently tackling a fire at a block of flats in east London.

The blaze broke out at a block of flats on De Pass Gardens in Barking with emergency services called at 3:31pm and fifteen fire engines dispatched to the scene of the incident. 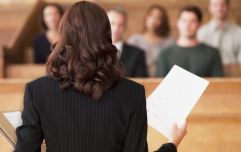 END_OF_DOCUMENT_TOKEN_TO_BE_REPLACED

The ground floor to the sixth floor of the block is currently alight, a London Fire Brigade spokesperson confirmed.

They added: "The Brigade was called at 3:31pm and is still at the scene. Crews from Barking, Dagenham, East Ham and surrounding fire stations are attending the incident.

"The cause of the fire is not known at this stage."

Station Manager Andy Maloney, who is at the scene, added: “Crews are continuing to work really hard to put the blaze out.

“Any residents who are affected by the fire are advised to go to the rest centre at Thames View Community Centre on Bastable Road. Transport is available from De Pass Gardens to take people there.”

A London Ambulance spokesperson said: "We were called at 3.32pm today to a fire in De Pass Gardens, in Barking.

"We have a tactical commander and our command support vehicle at the scene. We also dispatched London’s Air Ambulance.

"There are no reports of any injuries at the moment."

Girls With Goals || Her · Ep.161: Feeling Peachy - Sharon Keegan of Peachylean on being an absolute BOSS!
popular
Meghan was right to say Archie "won't be a prince" under Prince Charles
Love Island featuring show's first contestant with a disability
Opinion: It's your wedding, you can have an 'adults only' day if you want
Friends actor James Michael Tyler battling Stage 4 cancer
Laurel Hubbard to become first transgender Olympian
5 things we know for sure about this year's Love Island
Friends Star James Michael Tyler Files For Divorce
You may also like
4 days ago
WHO plan says women of "child-bearing age" shouldn't drink alcohol
4 days ago
Opinion: Why do we let YouTubers get away with everything?
4 days ago
Teenage girl dies at Dublin equestrian centre event
5 days ago
Berkeley balcony tragedy remembered six years on
5 days ago
Rob Delaney talks grief of losing two-year-old son Henry
6 days ago
Opinion: Survivors of domestic violence in Ireland deserve better
Next Page