The National Ploughing Championship has been CANCELLED today

It is cancelled for the full day.

The second day of the National Ploughing Championships in Tullamore has been cancelled today due safety concerns.

The opening of day two of the Ploughing was initially delayed by two hours this morning - from 9am to 11am, before being put back until 12pm. 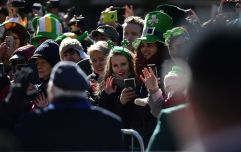 END_OF_DOCUMENT_TOKEN_TO_BE_REPLACED

However, the decision has now been made to cancel the second day of the event.

Storm Ali is wreaking havoc all over the country today with flights being cancelled to and from Dublin Airport, as well as 20,000 ESb customers being without power.

The weather forecaster said: "Storm Ali will track close to the west and northwest coast this morning. South to southwest winds veering westerly will reach mean speeds between 65 and 80 km/h and gusts between 110km/h and 130 km/h for a time.

"Gusts in excess of 130 km/h are possible in coastal regions of the west and northwest. The core of strong winds will be along Atlantic coasts at first, before transferring quickly eastwards during the morning.

Girls With Goals || Her · Ep.161: Feeling Peachy - Sharon Keegan of Peachylean on being an absolute BOSS!
popular
Bride dislocates her leg during her first dance in viral clip
Emilia Clarke is set to be the next Marvel superhero
Goodbye McDreamy! Disenchanted officially wraps filming in Enniskerry
People are sharing why they wouldn't go on Love Island, and their reasons are gas
Met Éireann issue thunderstorm warning amidst heatwave
Love Island fans reeling after shocking recoupling
Travel (again): 10 reasons a trip to Oslo should be at the top of your wish-list right now
You may also like
2 years ago
Podge and Rodge has reportedly been cancelled after one comeback season
2 years ago
Nicki Minaj has CANCELLED her Dublin concert tonight due to the weather
2 years ago
Modern Family has confirmed it's being cancelled after its 11th season
2 years ago
Oktoberfest Cork has been cancelled - even after 15,000 tickets are sold
2 years ago
Pink had to defend herself for cancelling her show in Australia
3 years ago
A number of European flights in and out of Dublin Airport cancelled today
Next Page