Members of the Northern Ireland assembly have been called to meet at Stormont on Monday for the first time since 2017.

MLAs were today informed that there would be a special sitting will take place, 1,004 days after the power-sharing government collapsed.

The move is a last-minute attempt to prevent a new law on abortion being triggered in the North.

Legislation on abortion and same-sex marriage were due to change on Monday 21 October if the assembly didn't reconvene by this date.

Former Police Ombudsman Baroness Nuala O'Loan, who opposes changes to the North's current abortion laws, this week called for MLAs to meet before the deadline.

She was supported by the DUP, with leader Arlene Foster stating that her party would be seeking a recall.

A petition on the issue today reached 31 signatures from members and today assembly Speaker Robin Newton today wrote to all MLAs, informing them that a special siting would take place on Monday. 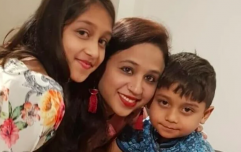 END_OF_DOCUMENT_TOKEN_TO_BE_REPLACED

They will meet at 12pm to discuss the motion "that this Assembly agrees that the legislative position in Northern Ireland will most appropriately be determined by the Northern Ireland Assembly."

Members will need to form a new power-sharing executive before they can begin the discussion.

Sinn Féin has said that its members will not take part on Monday.

popular
The Body on The Cube has finally been unmasked after 11 years
Boyzone's Keith Duffy set to for the next I'm a Celeb Get Me Out of Here
"80% of my body was covered:" LeAnn Rimes on life-long Psoriasis battle
5 Halloween cocktail recipes that taste good, but are terrifying
Bake Off's Noel Fielding welcomes second child, names her 'Iggy'
Little Mix's Perrie Edwards tears base of spine in horrific injury
Apparently, the film 'Rudolph the Red-Nosed Reindeer' encourages bullying
You may also like
2 days ago
"He was only in his 40s:" Laura Whitmore reveals cousin passed away from Covid-19
3 days ago
Bodies of two children and an adult discovered in Dublin
5 days ago
Emmerdale and Corrie actor Johnny Leeze dies following positive Covid test
1 week ago
Government vote to seal mother and baby home records for the next 30 years
1 week ago
Woman in court in connection with the identifying of boy found guilty of Ana Kriégel on social media
1 week ago
Gardaí investigating after body of woman and infant boy found in Dublin
Next Page