The photo reportedly features an image of Floyd with the words "you take my breath away" written across it.

A group of police officers in Los Angeles are being investigated for allegedly sharing an image styled as a Valentine's card which mocked George Floyd.

Reports say that a photo featuring Floyd had the words "you take my breath away" written across it. It has already drawn criticism from his family, the district attorney and the police union.

END_OF_DOCUMENT_TOKEN_TO_BE_REPLACED

Floyd died last May in Minneapolis after police pinned him to the ground with a knee pressed on his neck for several minutes. Disturbing footage of his final moments were leaked onto social media, with Floyd heard repeatedly telling the officers: "I can't breathe."

Speaking to the Los Angeles Times, Michel Moore, Chief of the city's police, said an internal investigation was already being conducted to find out how the image came into the department and which police staff were involved.

"Our investigation is to determine the accuracy of the allegations while also reinforcing our zero tolerance for anything with racist views," he said.

Ben Crump, a lawyer for Floyd's family, demanded that those responsible were held accountable. 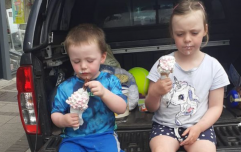 END_OF_DOCUMENT_TOKEN_TO_BE_REPLACED

"This is beyond insult on top of injury - it's injury on top of death," he said.

"The type of callousness and cruelty within a person's soul needed to do something like this evades comprehension - and is indicative of a much larger problem within the culture of the LAPD."

Floyd's death sparked massive protests across America and around the world last year as people called for an end to racial injustice and police brutality.

This development comes in the same week as the news that a mural to Floyd, based in Manchester's Northern Quarter, had been vandalised for a second time.

END_OF_DOCUMENT_TOKEN_TO_BE_REPLACED

Numerous murals also went up across the UK and Ireland in the aftermath of his death last year, including the one designed by Akse in Manchester.Not long after its conception, the mural was defaced when a masked vandal spray-painted the 'n word' over Floyd's face.

The mural was repaired but has now been defaced again, as images posted online purport to show.