As pro-Donald Trump rioters occupied the US Capitol building in Washington DC on Wednesday, breaking windows and vandalising one of the seats of the US legislature, the reaction was one of shock and anger.

From Americans and the wider world, condemnation for the scenes unfolding before the world's eyes was swift, with world leaders urging a peaceful transfer of power, and a deescalation of the violence perpetrated by the violent mob.

Disgraceful scenes in U.S. Congress. The United States stands for democracy around the world and it is now vital that there should be a peaceful and orderly transfer of power.

Inside the building, however, things appeared to be a lot less tense, with rioters seen lounging in the offices of elected politicians which they had broken into, and sauntering out of the building after looting it.

Those who unlawfully entered the Capitol seemed to do so with the confidence of people who were fully aware of the fact that violence was unlikely to be used against them by police, and footage of one police officer posing for a selfie with a rioter did little to dispel that notion.

The footage, posted on a streaming site by one of the pro-Trump mob, shows a cop pose for a selfie, before turning and nodding to the man next to him.

Cops are taking selfies with the terrorists. pic.twitter.com/EjkQ83h1p2 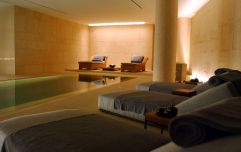 END_OF_DOCUMENT_TOKEN_TO_BE_REPLACED

The calm scenes inside the Capitol after a violent rush from the rioters has led to criticism of the police in attendance and the discrepancy between the force used against insurrectionists and that used against peaceful anti-racism protesters who took to the streets of American cities last year to protest the unlawful death of George Floyd.

Girls With Goals || Her · Ep.151: 'A Story Shared' - Aoife P. Rafter on blogging during a pandemic and living with CF
popular
Netflix announces new true crime documentary series: The Vanishing At The Cecil Hotel
Here's what will happen in Bridgerton season 2 - if Netfix goes by the books
QUIZ: How well do you remember these minor characters from Friends?
Someone has ranked the penis size of men from all over the world
When will lockdown end in Ireland?
QUIZ: How well do you really remember the first episode of Grey's Anatomy?
Science says this is how many dates you have to go on before you find 'The One'
You may also like
4 days ago
Bruce Willis asked to leave pharmacy for not wearing a face mask
5 days ago
The Mother and Baby Homes report is due to be published today
1 week ago
US doctor forgives $650,000 in medical bills for cancer patients
1 week ago
Dwayne 'The Rock' Johnson named Most Likeable Person in the World
1 week ago
Love Island's Zara Holland charged in Barbados for breaching Covid-19 rules
1 month ago
Pornhub removes millions of videos in purge of unverified content
Next Page