Changes are being made.

Primark is reintroducing women only fitting rooms in their UK stores after concerns were raised following an incident in one store.

Last month it was announced by the company that they would be reviewing their unisex changing rooms after a woman posted on social media describing two separate incidents that occurred.

Charlotte Kirby had visited one of the Primark stores in Cambridge when two men opened the changing room curtain on her when she was in there.

In an emotional video she said: "Twice, two men opened the curtain and walked in on me. Luckily both times I was [...] fully-clothed, but I could easily not have been."

Primark has now issued a statement on their website to confirm that the change is being introduced as well as bringing in longer curtains and new mechanisms to keep them in place.

The high street retailer said it was "important for everyone to have a positive experience in their stores".

@charlottemkirby Please be aware/spread the word and stay safe girls. Don’t go in changing rooms alone. This never even crossed my mind when I went into a unisex changing room. Thank you @primark ♬ original sound - Charlotte Kirby 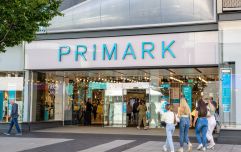 Primark is trialling online orders for the first time ever

END_OF_DOCUMENT_TOKEN_TO_BE_REPLACED

Unisex fitting rooms will still exist alongside the women's only ones in 187 of 191 stores across the UK.

The remaining stores here only have one changing room but the statement said this will also be under review.

Primark said: “We want our stores to be places where everyone feels safe and welcome.

“We’re sorry to hear this hasn’t been the experience some people have reported in our fitting rooms.

“We’ve listened to feedback from our customers and colleagues and you’ll start to see changes in our UK stores in the coming weeks.”

The statement added: “It’s really important to us that everyone has a positive experience in our stores. If they don’t, we are committed to doing all we can to make things better.

"We’ll be monitoring these changes closely and continuing to listen to our customers and colleagues."

It continued: “The combined fitting room area is for everyone.

"The women-only area is for all women and customers are not required to provide identification. If someone appears to be deliberately trying to abuse the policy then the store will manage at their discretion.

"The changes we are introducing are informed by the feedback we have had from customers and colleagues. We have taken these steps to try to improve our customer experience whilst using our fitting rooms.”

popular
"You can’t imagine what it feels to have had a baby and yet feel like you didn’t"
Kate Garraway gives heartbreaking update about Derek's health
The Lion King is returning to Dublin next year
Bad Sisters stars snap back at New York Times article that called them British actors
Mother of missing X Factor star speaks out a month after his disappearance
Nicola Coughlan lands "lifelong dream" role as she gets cast in Oliver Twist
Andrea Corr and Husband Welcome Second Child
You may also like
1 month ago
Here's when you can buy Penneys' famous Toy Show pjs
2 months ago
Stay in, get cosy: Penneys new home collection is here, and it is pure hygge
2 months ago
Penneys launches a menopause range of nightwear and underwear
2 months ago
Penneys are selling an almost perfect dupe of €1300 designer boots
4 months ago
Penneys fans are obsessed with the new SKIMS shape wear dupes
4 months ago
Neutral and cosy: Penneys' new homewares are making us excited for autumn
Next Page