There are lots of fond memories being shared about Robin Williams to mark the second anniversary of his death.

Included amongst them is a letter he once wrote to the school principal of his co-star Lisa Jakub, who played his on-screen daughter Lydia Hillard in Mrs Doubtfire.

When Lydia was filming the classic 90's movie she got into trouble with her school for missing so much class resulting in her expulsion. Lisa has since shared a letter that Robin sent to the principal when they refused to allow her to return to school after the filming ended.

END_OF_DOCUMENT_TOKEN_TO_BE_REPLACED

In it, he said that he found "Lisa to be a bright, inquisitive, and eager to learn young lady," and that, "a student of her calibre and talent should be encouraged to go out in the world and learn through her work."

He also added, "She should also be encouraged to return to the classroom when she's done to share those experiences and motivate her classmates to soar to their own higher achievements."

She wrote on her blog that the letter had changed her life and taught her a valuable lesson saying:

"Even though I had not spoken with Robin in a very long time, I always assumed there would be some future opportunity to tell him that his letter changed my life.

"It taught me that you stand up for the things that matter. And even if your attempts fail, you tried. You told the truth. You took care of your friends. You fought back."

Here is Robin's letter in full: 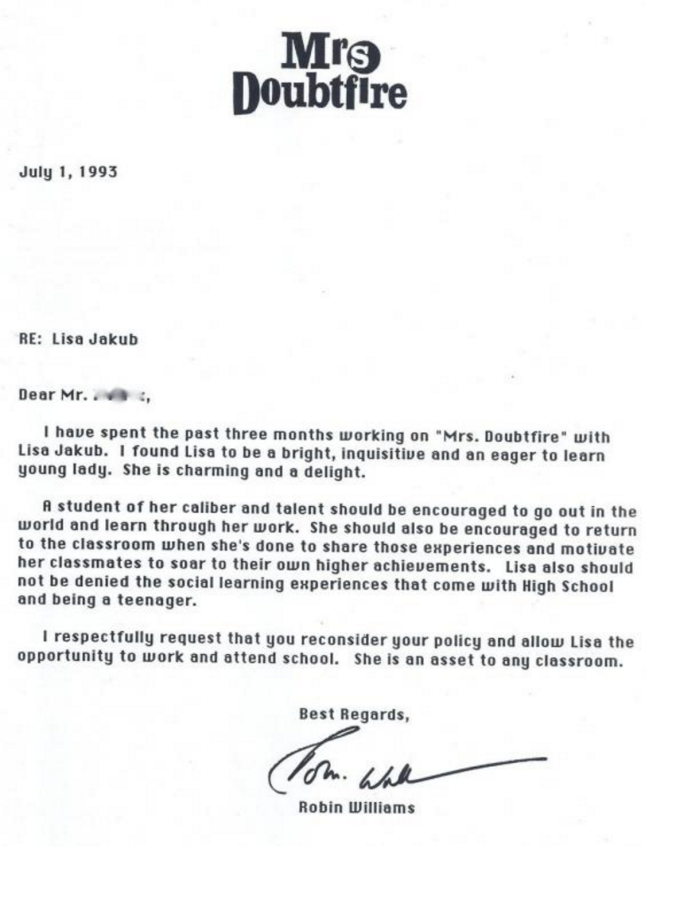 popular
Tributes pour in for designer Virgil Abloh following death at 41
8 of the hottest make-up trends to try this festive season
The best memes from this year's Late Late Toy Show
The internet is saying the same thing after Ryan's Toy Show opening
Japan to close its borders to tourists to prevent Omicron spread
Strictly's Giovanni Pernice responds to dating rumours following split from Maura Higgins
Vicky Phelan says terminally ill people should have right to decide how to die
You may also like
2 days ago
Legally Blonde 3 will catch up with Elle Woods as a mum
2 weeks ago
The Luther movie has officially started filming, Idris Elba confirms
4 weeks ago
Call The Midwife fans are going to love The Railway Children Return
1 month ago
Here's why Practical Magic beats Hocus Pocus as the best Halloween movie
1 month ago
"We've all lost people": Jamie Lee Curtis talks strong, female survivors in iconic films
2 months ago
Coco is officially the Ireland's favourite Pixar film, according to science
Next Page