1,277 people contacted the national broadcaster to complain about the programme which aired the second Monday before the referendum on the eighth amendment.

RTE has said that 92 percent of complaints referred to claims of unfairness towards the 'Yes' side of the debate.

END_OF_DOCUMENT_TOKEN_TO_BE_REPLACED

The broadcaster has defended the programme, saying that both the 'Yes' and the 'No' campaigns were afforded equal time to speak.

They also said that Claire Byrne "... consistently requested that speakers and audience show respect for each others point of view."

"Impartial analysis of the programme will demonstrate that, when the number of speakers on each side of the referendum question and the airtime afforded to them are both taken into account, the programme gave an equitable and fair opportunity to both sides to express their views." 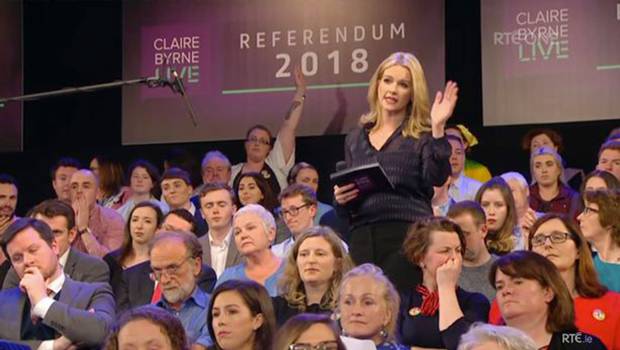 END_OF_DOCUMENT_TOKEN_TO_BE_REPLACED

RTE had previously stated that exact figures on complaints received about the programme would be deferred until after polling day.

The referendum was passed by a landslide victory to the 'Yes' side, with 66 percent of voters opting to repeal the eighth amendment.

The results of the referendum were revealed on Saturday following exit polls from RTE and the Irish Times suggesting an expected 'Yes' victory.

All complaints received by RTE following the Claire Byrne Live referendum special were responded to by the broadcaster.