No, this isn't the plot of a movie. This is real life.

Just when you think that the world can't get any weirder, you get a headline like this...

Fishermen in waters near the Norwegian fishing village of Inga reported last week that a white beluga whale wearing a strange harness had begun to harass their fishing boats, and a video of the whale has since emerged.

The tame whale repeatedly approached Norwegian boats, and a closer inspection found that there was a GoPro attached, but no camera.

Maybe it just wanted some cool shots for its finstagram. Sorry.

Professor Audun Rikardsen told the BBC that the harness "was attached really tightly round its head, in front of its pectoral fins and it had clips".

"A Russian colleague said they don't do such experiments, but she knows the navy has caught belugas for some years and trained them - most likely it's related to that," he also said. 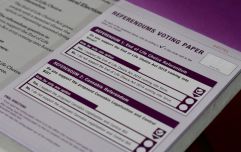 END_OF_DOCUMENT_TOKEN_TO_BE_REPLACED

Despite saying that a fellow scientist had told him that it was not the sort of kit that Russian scientists would use, Rikardsen did say that Russia does have a naval base in the region in question.

You can see a video, which was released by Norwegian public broadcaster NRK, of the whale in question being discovered here.

Whatever the whale is, it's very cute...

popular
Alex and Ani have released a Friends collection and could we BE any more excited?
Boyzone's Keith Duffy set to for the next I'm a Celeb Get Me Out of Here
"80% of my body was covered:" LeAnn Rimes on life-long Psoriasis battle
Little Mix's Perrie Edwards tears base of spine in horrific injury
12 spooky movies to watch on Netflix for the day that's in it
Dirty Dancing officially arrives on Netflix today and that's our Sunday sorted
The Body on The Cube has finally been unmasked after 11 years
You may also like
1 day ago
Kanye West presents Kim Kardashian West with hologram of her late father as birthday gift
2 weeks ago
Trump: “I feel so powerful… I’ll kiss everyone in that audience”
1 month ago
“Proud boys, stand back and stand by” Donald Trump refuses to condemn white supremacists in presidential debate
1 month ago
Death toll from Covid-19 pandemic passes one million worldwide
1 month ago
Two police officers shot during Breonna Taylor protests in Louisville
1 month ago
Mars to change name of Uncle Ben’s rice to Ben’s Original
Next Page