Ryan Tubridy Tells The Taoiseach to "Man Up"

Ryan Tubridy has called on the Taoiseach to ‘man up’ this week in a bid to try and save the Childline services.

The Late Late Show host has asked Enda Kenny to “have the decency” to find the money to save the children’s helpline and said that it was “mildly sickening” that Childline’s night service may face closure.

According to reports, the charity still needs to raise €870,000 in order to maintain their 24-hour service. 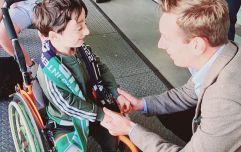 Ryan Tubridy and Adam King finally get to share a hug

END_OF_DOCUMENT_TOKEN_TO_BE_REPLACED

“That’s where the Taoiseach needs to come in,” Tubridy said on his radio show. “We don’t see too much of him but it’s time to man up, stand up to this think and put your hand in your pocket at a governmental level and get these people out of a hole so children aren’t spending the next four or five weeks getting an engaged signal at their end of their phone when they’re in trouble.

“Hopefully, this isn’t a dark stain on this Government’s copybook and that they sort this out at this time of year. It can’t be that much of a problem for them financially and the least he could do is have the decency to confront the issue and fix it,” he added.