Got to love these lads.

At present, every Irish supporter is watching from their sofa and saying 'if only we were there.'

While nothing will ever detract from your love for the boys in green, every Irish fan has probably 'adopted' a second country to support during the World Cup and Senegal are making a strong case to be everyone's favourite 'second' team. 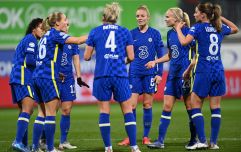 END_OF_DOCUMENT_TOKEN_TO_BE_REPLACED

For Liverpool fans, their devotion to Sadio Mane is an easy way in, but for other football fans, the enthusiasm that the Lions of Teranga have for the game is infectious.

Aside from their fans cleaning up after themselves - fair play lads - the side also have a very decent shot of making it past the group stages. Their opening round win against Poland has given them a superb start and with a game against Japan this afternoon, the African side will fancy their chances of making progress.

Ahead of the game, the Senegal squad went through a bit of light training and it's fair to say that the mood in the camp is good.

Hell, the mood is positively joyous. Anyone fancy bringing this method into their own training?

popular
Adam Collard responds to claims he cheated on Paige Thorne
Woman who 'fell off' rollercoaster ride is identified
Ellie Simmonds targeted by online abuse following Strictly debut
Corrie actress Lucy Fallon pregnant after miscarriage heartache
Netflix's true crime series Sins of our Mother is seriously insane
WATCH: First look at Netflix's YOU season 4
Alec and Hilaria Baldwin welcome their seventh child
You may also like
1 month ago
"I didn't do it": Rebekah Vardy sobs in TV interview after Wagatha Christie defeat
3 months ago
Gerard Pique and Shakira announce they have split after 11 years
4 months ago
Footballer Jake Daniels applauded for coming out as gay
6 months ago
Football star Katie Meyer passes away aged 22
7 months ago
An all-male panel celebrated a women in football ceremony
7 months ago
Coleen Rooney says she's learned to 'live with' Wayne's cheating but they're not 'lovey dovey'
Next Page