"We have to move away from thinking that there's a binary choice when it comes to Covid and reopening."

Minister for Further and Higher Education Simon Harris has outlined three options for the Government to consider ahead of a crunch National Public Health and Emergency Team meeting next week.

NPHET is set to review the spike in Covid-19 cases throughout the country, with next Friday's scheduled lifting of all remaining restrictions now in considerable doubt. 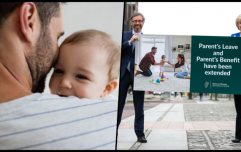 END_OF_DOCUMENT_TOKEN_TO_BE_REPLACED

A subsequent decision will be announced on Tuesday.

On Thursday, Tánaiste Leo Varadkar stated that if everybody in Ireland was fully vaccinated, there would be "no question" about the lifting of restrictions.

On Thursday evening, Dr Ronan Glynn noted that there is now an average of 50 people being admitted to hospital per day in relation to the virus – up from 35 per day at the end of September.

END_OF_DOCUMENT_TOKEN_TO_BE_REPLACED

"I think we have to move away from thinking that there's a binary choice when it comes to Covid and reopening," Harris began. "Is it a yes and a no, is it a proceed, is it not? I think there is now a third way.

"I think the three choices facing government – and we'll have to consult public health experts, NPHET will meet on Monday, the decision will be Tuesday – but I think there are three genuine options to consider and scrutinise:

"Proceed, pause, or proceed while retaining some safeguards."

END_OF_DOCUMENT_TOKEN_TO_BE_REPLACED

Harris posited a scenario in which the restrictions do lift but elements remain, such as the use of vaccine passports and face masks. He noted that he has been looking "with great interest" to Israel and how that country has been handling its own outbreak.

On the subject of expanding the booster programme beyond the current age categories, Harris said:

"I'm very conscious of this – I'm a politician and not a doctor. What I'm in favour of is seeking urgent advice from the National Immunisation Advisory Committee on this.

"I think there is growing evidence that a more widespread booster programme may have benefits to your population but it is appropriate that the advice is given by doctors and not politicians.

"But it would be useful to get that advice and I expect government will get advice on booster programmes next week from the National Immunisation Advisory Committee."

popular
Love Island's Gemma finally tells villa about dad Michael Owen on TV
Parent's Benefit Leave in Ireland is being extended from today - here's what you need to know
Love Island: Danica sets her sights on Andrew as Luca asks Jacques about his relationship with Gemma
10 stunning and affordable outfits that are perfect for a summer wedding
Irish girls name was the most used Irish name in the United States last year
Another of Gemma Owen's family could be headed for a reality show
Drama series about Maxine Carr and Ian Huntley is filming in Dublin
You may also like
2 days ago
Flavoured vaping products could soon be banned in EU
2 days ago
Irish man dies following hit-and-run in London
3 days ago
Airbnb is making its ban on parties permanent
4 days ago
Met Éireann issues Status Yellow rain warnings for five counties
4 days ago
Aer Lingus apologises for multiple cancelled flights to and from Dublin Airport
1 week ago
24-year-old Irish man dies following hit-and-run in Canada
Next Page