Suspicions Raised Regarding The Role Of Mother In Toddler's SUV Death

Suspicions have now arisen regarding the mother of a toddler who died after being left in a hot SUV for hours. Cooper Harris died tragically after he was left alone in the car during the day while his father was in work.

Leanna Harris, mother of Cooper, has not been charged with any crime as of yet but her behaviour is being considered as suspicious.

According to the Daily Mail, despite shock allegations at her husband's hearing on Thursday, Harris expressed very little emotion. Ms. Harris heard in the hearing that he her husband had essentially been living a double life and had apparently sexted up to 6 women on the day of his son's death.

END_OF_DOCUMENT_TOKEN_TO_BE_REPLACED

When Ms. Harris was informed that her son had not been dropped off at the nursery, she stated: "Ross must have left him in the car. There's no other explanation."

According to reports, when she was reunited with her husband at Police Headquarters, Harris asked: "Did you say too much?"

Apparently, Harris' mother asked why she was not in more shock or reacting to the death of her son to which she replied: "I must be in shock."

Her comments at the funeral of her son have also raised a few eyebrows. Harris apparently said in her speech: "He’s in the most peaceful, wonderful place there is," adding that she wouldn't bring him back if she could. 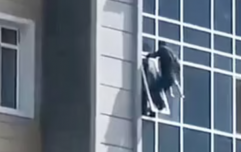 END_OF_DOCUMENT_TOKEN_TO_BE_REPLACED

Police confirmed last week that they were investigating the possibility that Mr. Harris may have intentionally left Cooper in the car. They also declared that they couldn’t confirm if Cooper was in the car at 9am when Mr. Harris arrived at work.

Harris is charged with felony murder and cruelty to a child in the second degree.

popular
Ekin-Su Cülcüloğlu signs the biggest fashion deal in Love Island history
Love Island producers respond to claims Jacques was kicked off the show for "bullying"
Lisa Kudrow addresses lack of diversity on Friends
Met Éireann extends high temperature warning for Ireland this weekend
Love Island's Amber opens up on unaired fight between Remi and Jacques
Five teenage girls in hospital after Kilkenny crash
Paige Thorne breaks her silence on Jacques O'Neill drama
You may also like
10 months ago
Mum shares horrifying story of toddler filming her in the shower on Instagram Live
10 months ago
WATCH: Irish toddler called a "young Reese Witherspoon" by Diane Keaton
3 years ago
A two-year-old girl has been found in a house in Cork with life threatening injuries
3 years ago
This little Irish girl swearing about her sore fingers is absolutely gas
4 years ago
Three-year-old boy seriously injured in suspected acid attack in the UK
4 years ago
This toddler stole the show during Meghan and Harry's visit to Croke Park today
Next Page