British LGBT organisation Stonewall has released their annual survey of the most inclusive employers in Britain and the number one choice is pretty left-field.

Their Workplace Equality Index is in its twelfth year, and 2016 is the first year it has become trans-inclusive. Over 60.000 employees and over 400 companies were involved in the compilation of this year's index. 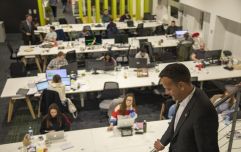 END_OF_DOCUMENT_TOKEN_TO_BE_REPLACED

The number one spot was reserved for MI5, The British intelligence agency responsible for protecting the UK against terrorist and spy threats.

In order for the companies to be measured in terms of inclusivity, survey participants were asked a series of questions such as:

Are lesbian, gay and bi people comfortable disclosing their sexual orientation at work?

Are there visible lesbian, gay, bi and trans role models in the organisation?

Are lesbian, gay, bi and trans employees supported by managers and senior managers?

Are staff confident reporting homophobic, biphobic and transphobic bullying in the workplace?

Director General of MI5 Andrew Parker stated: "Diversity is vital for MI5, not just because it’s right that we represent the communities we serve, but because we rely on the skills of the most talented people whoever they are, and wherever they may be".

MI5 has progressed from 134th place on the index to 1st in just six years.

popular
TikTok star arrested and charged with murder of estranged wife
Police in US deny Brian Laundrie DNA rumours
You stars Victoria Pedretti and Dylan Arnold spark romance rumours
Bake Off fans not able for Prue's innuendos last night
Channel 4's Breastfeeding My Boyfriend doc criticised for contributing to stigma
Penneys responds to calls for online store to be set up for Christmas
Brian Laundrie parents 'to cremate body with no funeral' amid mystery over cause of death
You may also like
1 year ago
Are you looking for an insanely talented female or non-binary musician? This directory is for you
1 year ago
Watch to educate: 8 shows and movies that depict racial injustice against black people and the fight for equality
2 years ago
Hearing this one thing was a lightbulb moment in terms of my opinion on feminism
3 years ago
Grammys president tells women in music to step up, they tell him to step off
3 years ago
Gender equality has now been achieved thanks to Celebrity Big Brother
3 years ago
This is the one question that everyone hates in an interview
Next Page