There's going to be a very, very good change in the weather soon

Looks like it's time to break out the suncream again.

Over the last few days, it feels like we have had a never-ending stream of weather warnings - but there's a bit of good news on the way.

After a few cooler days, Met Éireann forecasters are saying that the temperatures are going to start climbing again early next week.

In fact, the national forecaster says it will reach as high as 24C in some parts of the country on Tuesday.

END_OF_DOCUMENT_TOKEN_TO_BE_REPLACED

But while it's going to get toasty once again, there are also some potential showers on the way.

Sunday is looking to be a bit cooler, with patchy outbreaks of light rain and drizzle.

END_OF_DOCUMENT_TOKEN_TO_BE_REPLACED

But drier and brighter conditions will develop in the afternoon, with temperatures as high as 19C.

And on Monday, many eastern areas of the country will start of dry - with the best of the sunshine in east Munster and south Leinster.

The cloudy, humid conditions (with some patchy outbreaks of rain) will sweep through most areas during the afternoon and evening.

Temperatures will vary from the high teens in western and northern areas into the low 20s for parts of the south.

Tuesday will, again, be another warm and humid day - although there will be some outbreaks of rain in places. 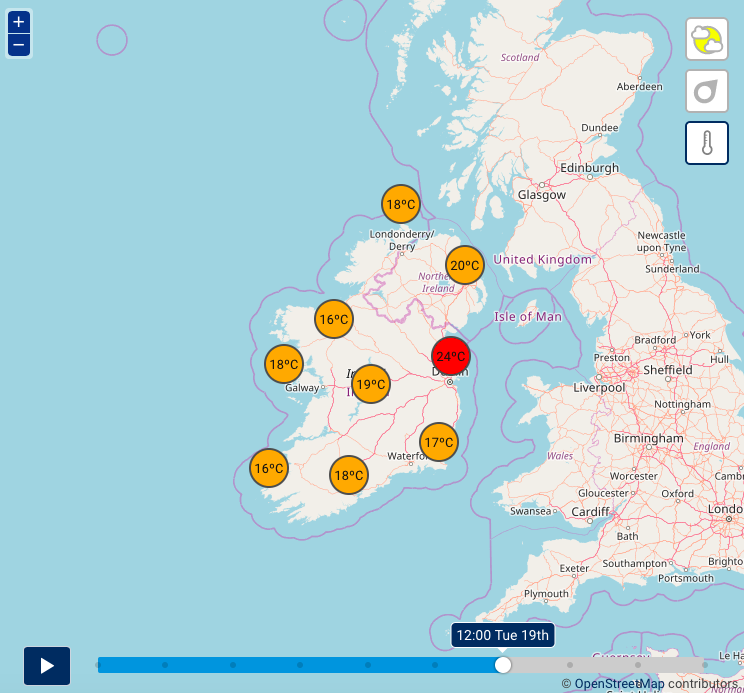 Temperatures will range from the high teens into the low 20s, with a peak of 24C currently forecast.

Wednesday and Thursday look to be mostly dry and sunny days, with temperatures forecast to stay around normal.

popular
Davide Sanclimenti opens up on having kids with Ekin-Su Cülcüloğlu as he turns down Dancing On Ice
Angelina Jolie accuses ex-husband Brad Pitt of abuse
It looks like Ireland could get a white Christmas this year
Molly Mae Hague fans are convinced she just accidentally revealed her baby's gender
Rebekah Vardy asks Coleen Rooney to give legal fees to charity
Inbetweeners co-stars Joe Thomas and Hannah Tointon welcome their first child
WATCH: The trailer for Florence Pugh's new Irish film is here
You may also like
1 week ago
Contraception, IVF and rent relief: Key takeaways from Budget 2023
1 week ago
Why Cuba's redefinition of the family is so significant
1 week ago
Here's why Iranian women are protesting the country's morality police
2 weeks ago
Charlie Bird to be awarded Freedom of Wicklow
2 weeks ago
Widespread protests in Iran after woman dies in police detention
2 weeks ago
Ryan Reynolds shared his experience of getting a colonoscopy after losing a bet
Next Page