The figures were released in a Higher Education Authority (HEA) report set to be published today.

Courses in and related to construction, computer science and engineering have the highest dropout rates of third-level courses in Irish universities and institutes of technology, according to a HEA report due to be published on Thursday.

The report, titled ‘A study of progression in Irish Higher Education (2013/14 to 2014/15)’ showed that there was a 20% dropout rate in construction and related services between 2013/14 and 2014/15, with a 16% dropout rate for computer science and a 13% dropout rate for engineering (excluding civil) and social science, business and law & arts and humanities courses. 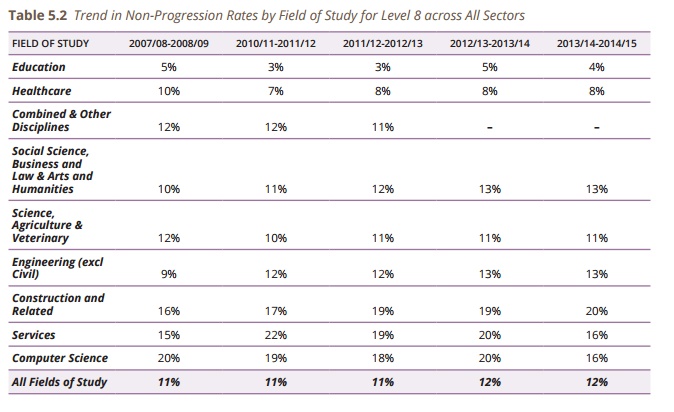 END_OF_DOCUMENT_TOKEN_TO_BE_REPLACED

The report showed that one in six third-level students (approximately (6,200) are dropping out of courses during their first year and that non-progression rates have reduced ever so slightly to 15% in recent years.

When it came to the various individual third-level institutions in Ireland, meanwhile, IT Blanchardstown (29%) Limerick I (27%) and IT Tallaght (24%) had the highest non-progression rates, while the lowest non-progression rates were found in St. Pat’s College in Drumcondra (4%), Mary Immaculate College in Limerick (4%), Mater Dei Institute of Education, Maynooth University and Trinity College Dublin (all 9%). 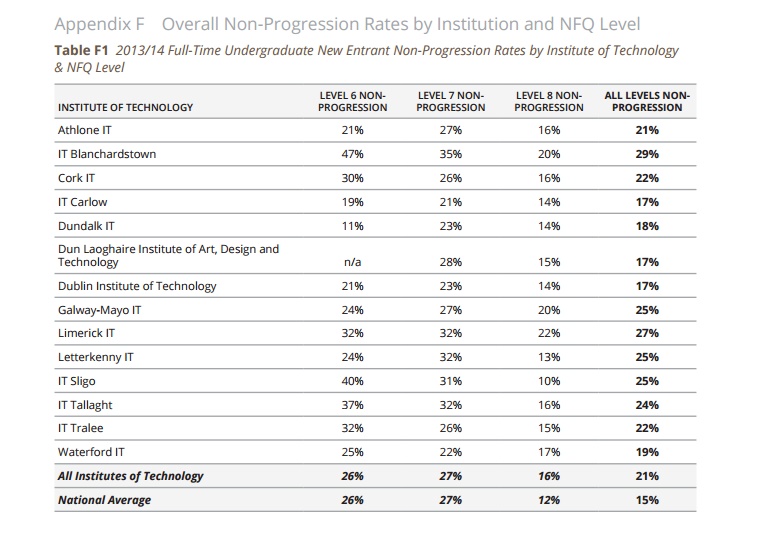 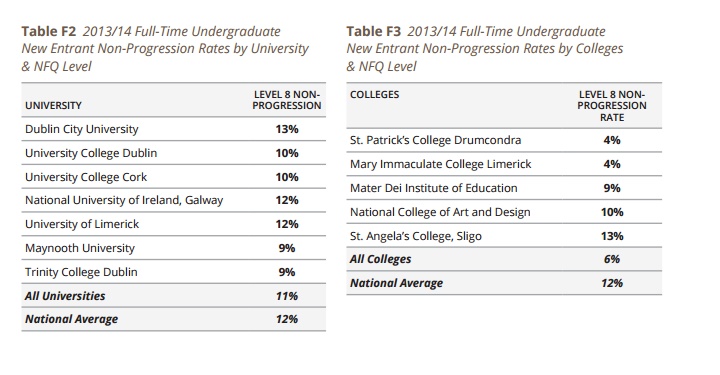 You can see the report in full here.

popular
Fundraiser set up for boy attacked by pit bull in Wexford
Kanye to give Kim Kardashian $200k in child support every month
Balenciaga is suing production company following offensive ad campaign
The trailer for Channel 4's Vardy V Rooney: A Courtroom Drama has dropped
"I've got nothing to hide": Ekin-Su confronts Davide over afterparty video
Fair City star Jenny Dixon shares her twins' gender in sweet video
Olivia Wilde struggling after Harry Styles break-up
You may also like
1 day ago
Rules around blood donation have changed in Ireland as of today
1 month ago
Meteor shower to be visible over Ireland tomorrow
2 months ago
Tayto Park has been renamed Emerald Park
2 months ago
Gardaí investigation underway as baby skeletal remains found in Cork
2 months ago
Disability group shares concerns ahead of winter following "disappointing" budget
2 months ago
Contraception, IVF and rent relief: Key takeaways from Budget 2023
Next Page