The incident occurred on Thursday.

Three men in Co. Down have been arrested after the death of a 20 year old woman.

Police in Northern Ireland received a report that a woman had been found collapsed in her apartment building at around 8.30pm on Thursday. 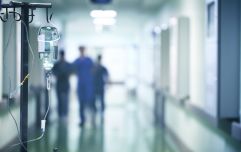 END_OF_DOCUMENT_TOKEN_TO_BE_REPLACED

She was found in a unit of flats on Dromore Street in Ballynahinch and it was later confirmed that the woman had died.

A post mortem is set to take place at a later date to determine the cause of death.

Despite no cause of death as of now, three men have since been arrested on suspicion of manslaughter and are currently in custody as police enquire about the death. Two men are aged 26 with the other aged 30.

A PSNI spokesperson said: "We would ask if anyone was in the wider Dromore Street area last night and noticed anything suspicious at this address or in the wider area to contact us on 101 quoting reference 1626 02/12/21."

popular
Women are rinsing their hair in apple cider vinegar – and the results are amazing
"Hair contouring" is about to be huge, here's everything you need to know
The Puppet Master: Where is Robert Hendy-Freegard now?
Here is how your trendy bath bombs are actually really bad news for your vagina
Damian Lewis pays touching tribute to late wife Helen McCrory with Irish poem
Love is in the air: 3 new fragrances we love – just in time for Valentine's Day
Someone has ranked the penis size of men from all over the world
You may also like
16 hours ago
Teen hospitalised with "apparent stab wounds" after incident in Cork
18 hours ago
Orange is the New Black and Seinfeld star Kathryn Kates dies aged 73
19 hours ago
Only Fools and Horses' Patrick Murray has cancerous lung tumour removed
20 hours ago
Toddler dies after being struck by vehicle in Co. Cork
1 day ago
Actor Michael Madsen's son Hudson has passed away, aged 26
1 day ago
Several people killed after crush at Africa Cup of Nations match
Next Page