New legislation granting legal recognition to same sex parents is too narrow in focus, says the Equality For Children campaign.

Today, Ireland takes an important step forward in granting legal recognition to same sex parents. The news this morning that Health Minister Simon Harris was due to sign off on the relevant parts of the Children And Family Relationships Act was was greeted warmly – however campaigners say that it does not go far enough.

In fact, according to the Equality For Children campaign, 50 percent of children would be left behind by this legislation.

"I want to be clear that today is not a win for us," campaign founder Ranae Von Meding said in a statement.

"The signing of this commencement order has already been delayed seven times over the last five years. And only a fraction of LGBT+ families and their children will be covered by it. My family along with many others will continue to be left behind." 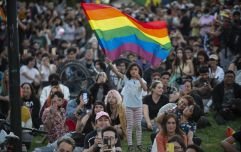 END_OF_DOCUMENT_TOKEN_TO_BE_REPLACED

The Children And Family Relationships Act will allow children of LGBTQ+ families to have a legal relationship with both parents in cases where both parents are women who conceive using a traceable donor at an Irish clinic.

Children born to two male parents or transgender parents, born using surrogacy or using an international clinic are among those who would not be covered by the legislation, Equality For Children says.

"It is not as has been reported today – as ‘equality for same sex families’," Ranae continued.

"It is some equality for some LGBT+ families but only if you meet the criteria. And many of us unfortunately do not. We will continue to campaign and lobby until a real solution to provide equality to all our children is realised."

Equality For Children campaigners will meet with the Minister to see the legislation signed this afternoon. Before that happens, the group plans a demonstration outside the Department of Health by LGBTQ+ parents and supporters "who feel they are still being failed by the Irish Government".

popular
Airport outfits are all the rage as we head abroad - here are the 4 best ones
Gemma Owen gets to know Jack Keating as her head turns on tonight's Love Island
So it seems Ekin-Su once competed as Miss Ireland before Love Island fame
Love Island's Gemma finally tells villa about dad Michael Owen on TV
A 'hangover pill' has just gone on sale in the UK - and they ship to Ireland
Two women killed in shark attacks near popular tourist beach in Egypt
WATCH: Gemma is left fuming in tonight's Love Island as Luca kisses another girl
You may also like
1 month ago
Conversations With Friends tackles sexuality the way Normal People tackled sex
3 months ago
WATCH: The trailer for Netflix's new queer love series Heartstopper is here
5 months ago
Love Island now open to non-binary contestants
1 year ago
10 books with LGBTQ+ themes to add to your reading list this Pride month
1 year ago
90-year-old grandfather comes out as gay in viral post and inspires millions!
2 years ago
'Extremely isolating': LGBTQ+ homeless community faces more challenges
Next Page