A witness described seeing the actor pursuing a suspected moped thief through gardens and a building site in Richmond, London, before apprehending the culprit.

The thief crashed the stolen moped and made a run for it, but Hardy caught up with him, announcing: "I've got the c**t!" 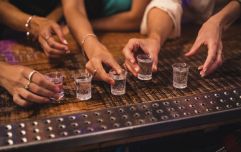 END_OF_DOCUMENT_TOKEN_TO_BE_REPLACED

Arun Pullen, the 22-year-old witness whose garden Hardy chased through, told The Sun: “It was mental – like he’d switched to superhero mode in an action movie.

"Two boys on the nicked moped had jumped a red light and smashed into a car. Tom must have been walking down the road. He went off like a shot in pursuit and looked furious.

"If the kid had been dumb enough to resist I reckon Tom would have given him a good hiding."

Hardy reportedly told onlookers: "This little s*** nicked something and now he’s got himself a ­broken leg."

Both the suspects were injured in the crash. They've been arrested and are now reportedly facing theft charges.