The top 25 schools in Ireland have been revealed

You may know the schools in this list. Did your one make the grade?

As is the norm with each passing year, The Sunday Times have collated their list of the top 25 schools in Ireland and for the sixth year in a row, Limerick's Laurel Hill Gaelcholáiste has taken the top spot.

95.2% of the girls attending the Gaelcholáiste have progressed to university. 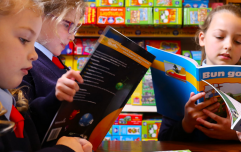 END_OF_DOCUMENT_TOKEN_TO_BE_REPLACED

In terms of the metrics that are used to compile this list, The Sunday Times Schools Guide 2019 ranks the top 400 secondary schools in the Republic of Ireland by the average proportion of pupils that have gained college places in autumn 2016, 2017 and 2018 at one of the nine universities on the island of Ireland, main teacher training colleges, Royal College of Surgeons or National College of Art and Design.

Where schools are tied, the proportion of students gaining places at all non-private, third-level colleges are taken into account. Schools offering only senior cycle are excluded.

The top girls' fee-paying school is Loreto College, St Stephen's Green, Dublin where 90.2% of its pupils progress to university.

END_OF_DOCUMENT_TOKEN_TO_BE_REPLACED

Loreto College is joint third on the list with the fee-paying Presentation Brothers College, Cork, the top boys' school this year. South Dublin's Gonzaga College is down one place on last year to 5, with 88.8% of the boys going to university.

Scoil Mhuire, the best girls' school in Cork, has dropped five places to 7 with an average of 85.8% of its pupils gaining university places between 2016 and 2018.

Ranked tenth overall for a second year, Coláiste na Coiribe, Galway, is the top mixed school  in the guide. With 590 students, the Galway Gaelcholáiste sent an average of 84.4% to university between 2016 and 2018.

Here are the top 25 schools in Ireland, as per The Sunday Times Best Schools Guide. 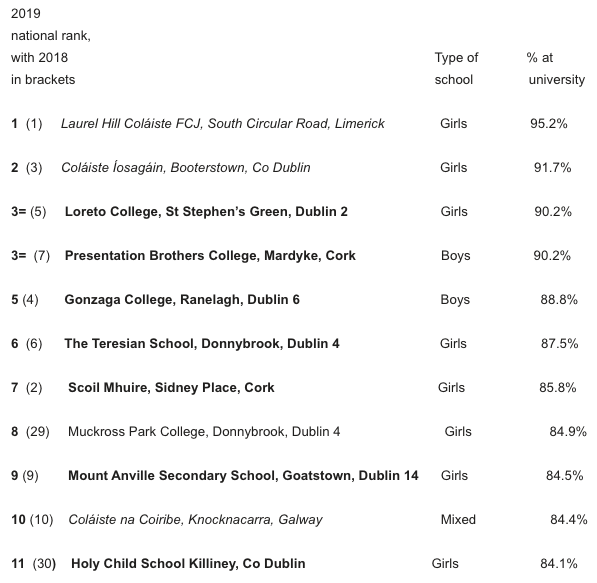 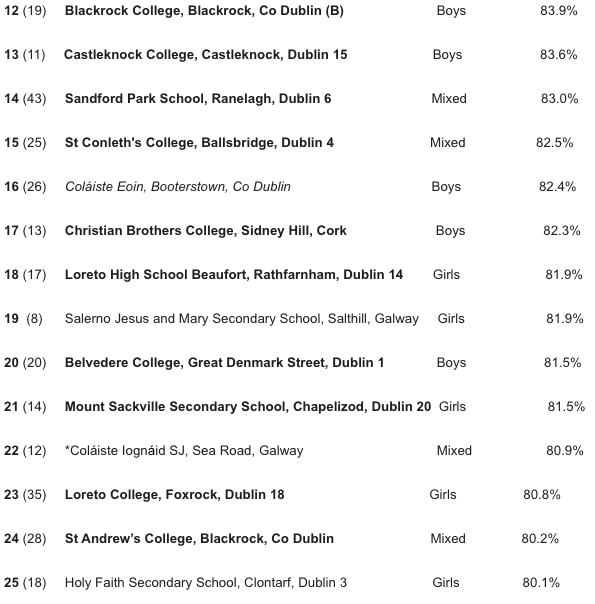