The high street retailer has apologised for dismantling a pro-feminist display 20 minutes after it was set up.

Friday was the intended launch of the promotion for the new pro-feminist book, Feminists Don’t Wear Pink (and other lies) however the decision was taken to remove the display before the store even opened to the public.

Today sees the release of #FeministsDontWearPink (And Other Lies), a collection of writing from a group of amazing women on what feminism means to them. To celebrate this timely book, we had agreed to host a pop-up with Topshop, with products supporting the UN charity Girl Up. pic.twitter.com/PiGnOsKGXX

Topshop apologised for their actions, but did not justify them saying on Twitter:

The book's publisher also took to Twitter to express their dismay and suggested that in a seemingly liberal society, feminism still seems unpalatable to some:

We’re working on finding another place to host our pop-up and the amazing products that support Girl Up. In the meantime, thank you for your support. This book aims to prove that the word ‘feminist’ is accessible to everyone. Today’s events suggest there is still some work to do. 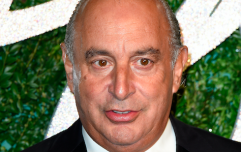 END_OF_DOCUMENT_TOKEN_TO_BE_REPLACED

The new book, written by Scarlett Curtis, was published in conjunction with Girl Up, a UN-founded charity that aims to promote gender equality by providing leadership development training courses which help empower young women to pursue positions of power.

The authour was equally disappointed with Topshop's decision to pull the display and criticised "powerful men" inhibiting the growth of equality:

What makes me most sickened and sad is that a man who clothes an entire nation of teenage girls thinks it’s controversial to fight for the equality of those girls. This is much less about Topshop than it is about powerful men #PinkNotGreen

This is yet another example of businesses afraid to set up their stall and take a political stance for fear of affecting sales. It is frightening to think that feminism is still believed to be controversial in the modern era.

popular
Taxi driver who dropped missing woman Bernadette Connolly off comes forward
Ashling Murphy's funeral to take place today
Concerts and pub restrictions are expected to be lifted this week
The massive Penneys in Dundrum is relocating - and getting even bigger
Gardaí are planning to make an arrest in Ashling Murphy murder case
Una Healy "having fun" dating Garda love interest
Fans convinced Love Island's Chloe inspired new Kanye track
You may also like
3 months ago
People are losing it over these "bum rip" jeans from Topshop
1 year ago
We're absolutely obsessed with this little black dress, and it's only €26 in the Topshop sale
1 year ago
We can't get over how gorgeous this €52 maroon teddy coat from Topshop is
1 year ago
The €52 Topshop dress that will be your new go-to on nothing to wear days
2 years ago
The €20 Topshop jumper that we're going to be living in all weekend
2 years ago
We are absolutely in LOVE with this incredible €13 dress from the Topshop sale
Next Page