The teen's song has hit number one on the iTunes charts.

A familiar face from the Late Late Toy Show is making his name in the music industry after his debut single hits the number one spot.

Michael Moloney's song All That I Do has shot to the number one spot on the iTunes chart.

You may remember this familiar face from last year's Late Late Toy Show when Michael was surprised with his musical inspiration Dermot Kennedy live on the show.

With a more personal message behind it, the Toy Show star dedicated the single to his late father after performing it earlier this month on The Late Late Show.

Michael told RTE's 2FM: "One day mum was making me breakfast in a pan and I looked over and my dad was a chef and so he used to cook me breakfast in the same pan and I was just remembering back to those times."

"It was like a lightbulb moment: why don't I write a song about my dad?"

"This song was different from my other songs. I was writing about a real-life event that happened, and the lyrics embodied how I felt about my dad passing away." 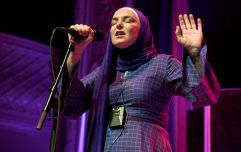 Sinead O'Connor takes back her plan to retire from music

END_OF_DOCUMENT_TOKEN_TO_BE_REPLACED

Michael said that initially, he wrote the song for himself and never expected anybody to hear it.

It wasn't until he uploaded it to his Spotify account, which he had made to upload covers, that his world changed.

The 14 year old added: "I thought I would just put it up on my own Spotify which I had just made for a few covers, it would be something I had for my dad because I felt he deserved it. And then Universal got involved and I’ve never been so excited before and now we are always onto the team in Universal and they are so lovely as well."

And while he may be at the top of the charts, the teen is determined to stay humble and take in every second of the journey.

popular
My hair has never been this thick and healthy – and here is what I have been doing differently
The sad reason why viral gymnast, Katelyn Ohashi, isn't on the USA Olympic team
WATCH: WAP sign language interpreter steals the show at festival
Someone has ranked the penis size of men from all over the world
Here's what happens on every day of your menstrual cycle (roughly)
Why Are Men so Obsessed With Boobs? The Answer is Pretty Surprising...
Johnny Depp confirms he will be back as Grindelwald in Fantastic Beasts 3
You may also like
8 hours ago
WATCH: WAP sign language interpreter steals the show at festival
1 month ago
Westlife's Mark hopeful that "biggest gigs" of his life will go ahead this summer
1 month ago
Noel Gallagher calls Prince Harry a "f*****g woke snowflake" in interview
1 month ago
Ellie Goulding shows her newborn son to the world in adorable video montage
2 months ago
Jesy Nelson accidentally posts new music online - and it's SO good
2 months ago
Sinéad O’Connor calls out "offensive and misogynistic" interview on BBC Radio
Next Page