The incident took place while they were filming the two Kill Bill movies.

As part of a long interview with the New York Times, actress Uma Thurman has finally followed up on the hugely emotional answer she gave to a question a few months ago:

Uma Thurman's response when asked about the flood of sexual misconduct allegations....wow. pic.twitter.com/Sw5Br1GwFg 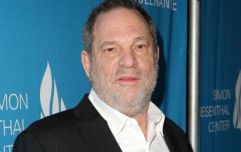 END_OF_DOCUMENT_TOKEN_TO_BE_REPLACED

In the new interview, Thurman claims that Weinstein assaulted her in a hotel room in London over 25 years ago, and in a later incident, threatened to derail her career.

According to Deadline, Scotland Yard has received even more sexual assault allegations against Weinstein in the last few days, but Entertainment Weekly are reporting that the producer is considering legal action against Thurman following her accusations.

However, in the same NYT interview, Thurman spoke about writer/director Quentin Tarantino the actress had previously worked with on Pulp Fiction (a movie produced by Weinstein, along with the majority of Tarantino's movies), and a particular moment while on the set of Kill Bill.

With four days left on the epic nine-month shoot, Thurman claims she was asked to perform a particular driving stunt herself, in a car she felt entirely uncomfortable driving in, and had requested a stunt-driver perform instead.

As per the interview:

"Quentin came in my trailer and didn’t like to hear no, like any director,” she says. “He was furious because I’d cost them a lot of time. But I was scared. He said: ‘I promise you the car is fine. It’s a straight piece of road.’” [Tarantino said] 'Hit 40 miles per hour or your hair won’t blow the right way and I’ll make you do it again.’ But that was a deathbox that I was in. The seat wasn’t screwed down properly. It was a sand road and it was not a straight road."

The video, which was initially posted as part of the New York Times story, and has since been uploaded to YouTube, show what happened next.

Warning: this footage may be upsetting for some viewers.

Thurman continues in the interview:

"The steering wheel was at my belly and my legs were jammed under me. I felt this searing pain and thought, ‘Oh my God, I’m never going to walk again'." When I came back from the hospital in a neck brace with my knees damaged and a large massive egg on my head and a concussion, I wanted to see the car and I was very upset. Quentin and I had an enormous fight, and I accused him of trying to kill me. And he was very angry at that, I guess understandably, because he didn’t feel he had tried to kill me." 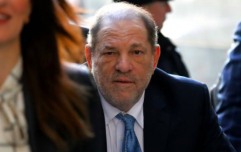 END_OF_DOCUMENT_TOKEN_TO_BE_REPLACED

Thurman goes on to say that Tarantino didn't release the footage of the crash for over 15 years, and Thurman refused to sign a document Miramax (Weinstein's company at the time) “releasing them of any consequences of my future pain and suffering".

Thurman also claims that while filming Kill Bill, Tarantino stepped in himself to choke Thurman with a chain in a scene performed by teenage girl Gogo, as well as the spitting in her face in the scene edited to look like actor Michael Madsen had done it.

Tarantino did not respond to the New York Times' requests for comments.

popular
You stars Victoria Pedretti and Dylan Arnold spark romance rumours
Viral TikTok shows how to keep warm wearing tights in winter
Channel 4's Breastfeeding My Boyfriend doc criticised for contributing to stigma
Japanese princess gives up royal title to marry college sweetheart
Brian Laundrie parents 'to cremate body with no funeral' amid mystery over cause of death
New period drama A Very British Scandal starring Claire Foy is coming to TV soon
Late Late Show viewers are not happy with Ryan's questions for Billy Connolly
You may also like
3 months ago
Harvey Weinstein is being handed over to Californian authorities for extradition
4 months ago
Carey Mulligan and Zoe Kazan to star in film about Weinstein scandal
1 year ago
Harvey Weinstein has been sentenced to 23 years in prison
1 year ago
'Be a lady they said' made waves yesterday, at the exact moment it should have
1 year ago
Harvey Weinstein found guilty of criminal sexual act in the first degree and rape in the third degree
1 year ago
Harvey Weinstein arrives to court for first day of sexual assault trial
Next Page