Vinnie Jones was the subject of major criticism over the weekend after he shared a grotesque picture on Twitter.

A keen hunter, the former soccer player shared a picture of over 100 dead foxes after a night of hunting. 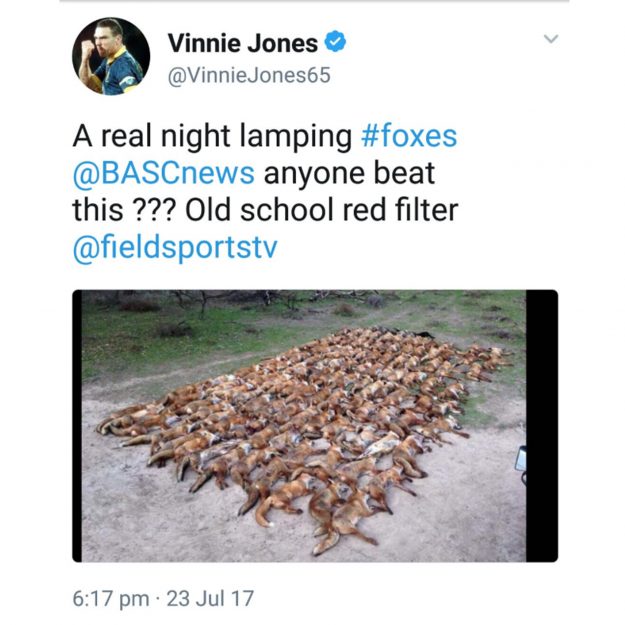 The actor has spoken about his interest in hunting birds and foxes before, and often shares pictures of his prey on social media.

The actor previously posed smiling alongside 16 dead rabbits and boasted about how quickly it took him to kill them.

how about this in 2 hours pal pic.twitter.com/5OR4FrfGHZ

While the British Association for Shooting and Conservation deemed Jones’ hunt “necessary to ensure that damage to game, wildlife and livestock is kept at acceptable levels”, the League Against Cruel Sports said it was “nothing less than a massacre".

“The extermination of such a large number of foxes cannot be interpreted as simply dealing with a rogue fox problem or wildlife management,” chief operating officer, Philippa King said.

“Although the activity may be legal, there is no doubt it is unethical and likely totally unjustified – as fox populations are self-regulating.

The joy expressed here highlights the true nature of this activity, which is killing wildlife for fun & has nothing to do with fox control. pic.twitter.com/1NTdkcMKAU

“The joy expressed here highlights the true nature of this activity, which is killing wildlife for fun and has nothing to do with fox control.”

Jones has since deleted the post from his social media profile.

popular
5 new additions to Netflix to spend your weekend watching
Irish teacher Lucy Lanigan-O'Keeffe is engaged Prince William's best friend, Thomas van Straubenzee
The second season of Dirty John lands on Netflix next week and we’re already hooked
Daisy Coleman from Netflix's Audrie & Daisy has died, aged 23
So, William and Harry have a step sister... and who knew?
It turns out we may have been brushing our hair wrong the whole time
Gwen Stefani reportedly pregnant with baby number four
You may also like
7 months ago
Red carpets, Adidas and oysters: Our top 10 fashion moments of 2019
1 year ago
This Insta account that shares unseen throwbacks of celebs is curing our hangover
1 year ago
Emma Louise Connolly reveals her plans for a traditional wedding with a modern twist
1 year ago
This ONE brand was spotted on all the celebrities at Coachella this year
1 year ago
Malika Haqq just went in on Jordyn Woods AGAIN ahead of her 'tell-all' interview
1 year ago
Rihanna is blessing us again by launching new lip paint shades for her Fenty Beauty line
Next Page