This is absolutely brilliant.

RTÉ paid tribute to Gay Byrne on Tuesday night with a special edition of The Late Late Show, following the announcement of his death on Monday.

Byrne hosted the iconic weekly show from 1962 until 1999, and his life and career was celebrated on Tuesday night with a stellar show.

The night opened with an emotional montage, highlighting the impressive scale and scope of Byrne's 37 years on the show, where he established a reputation as arguably the most influential broadcaster in the country.

But if that didn't have you feeling a little bit emotional, we reckon the final performance of the night surely did.

Led by Finbar Furey, John Sheahan of The Dubliners, Sharon Shannon, Donal Lunny and Mary Black, this special rendition of The Parting Glass could bring a tear to a glass eye.

The finale performance on our Gay Byrne Tribute, 'The Parting Glass'. #LateLate pic.twitter.com/VdK0Bk4Z7x 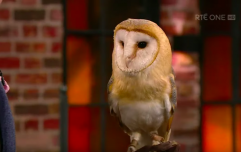 So, the Late Late Show Owl has been named Gabriel, following a public vote

END_OF_DOCUMENT_TOKEN_TO_BE_REPLACED

The guest list (see below) for the special episode was fairly star-studded, as anyone who tuned in found out.


popular
Holly Willoughby's checked Zara skirt is the perfect way to dress up your everyday look
Celebrities have nothing but praise for Jennifer Aniston's 'morning after' post
Love Island's Rebecca appeared to have her contraceptive patch on last night and fair play to her
Bank of Ireland warns customers to delete latest scam text from phones immediately
Louise Cooney just wore a gorgeous €65 coat from Pretty Little Thing and we ADORE it
Sorry, wait... what? Apparently, Michael Griffiths is 'head over heels' in love with Ellie Brown
Meghan Markle's new title is likely to be changed, as she's now styled like a divorced woman
You may also like
1 month ago
The lineup for this week's Late Late Show is officially here
1 month ago
Shane MacGowan to sing 'Fairytale of New York' on The Late Late Show next week
1 month ago
The Late Late Toy Show was the most-watched Irish TV programme this year
2 months ago
Here's the full lineup for this week's episode of The Late Late Show
2 months ago
Here are the guests on this week's Graham Norton and Late Late Show
2 months ago
Gay Byrne captured the hearts of the Irish nation and his voice will be remembered forever
Next Page