Seeing Tom Daley shed tears after, at long last, win an Olympic gold medal was just about as heartwarming as we thought things could get - until we saw him casually knitting while watching the women's springboard final. Whole. Some.

It was only a week ago that we thought we'd seen the greatest moment of his career, but how wrong were we. The best part about it all is that he just can't seem to stop.

Urgent update: Knitting action is back underway at the Aquatics Centre. This time it is a @TeamGB jumper! 🇬🇧 pic.twitter.com/tJlueScIp1

Unsurprisingly, social media absolutely lapped it up. A timely reminder that he's just a great guy.

Just confirming his National Treasure status in my eyes https://t.co/gY6FWXtVnq 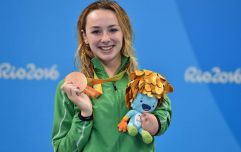 END_OF_DOCUMENT_TOKEN_TO_BE_REPLACED

Perhaps the most wonderful thing about it all is that he does it all for charity. The 27-year-old gives away his homemade creations in an effort to raise money for a number of causes; earlier this month, Tom successfully raffled off a chunky rainbow sweater and raised £5,787 for the Brain Tumour Charity. He chose that organisation as his father died in 2011 from a brain tumour at age 40.

Also peeps, the reason why Tom Daley was knitting today is because of this.

He is raising money for charity.

Makes him all the more adorable doesnt it? And makes you think, “what have you done for the world today?”

Since the word got out, his Instagram has been flooded with messages of love and support, as per.

From Team GB and doggie themed jumpers, to Union Jack mittens and more, Tom Daley knitting is the injection of positivity you never knew you needed.

As if he hadn't done already, Daley continues to cement his status not only as an incredible athlete and role model for young people, but a high-profile LGBTQIA+ icon whose openness, alongside his obvious dedication to his sport, is absolutely infectious.

Keep on doing your thing, Tom! You're doing great.

popular
Bride asks for divorce day after wedding following groom's disrespectful cake stunt
Head of dive squad searching for Nicola Bulley thinks 'something's not right'
Tributes paid following tragic death of Emma Pattison and her family
Rosanna Davison issues warning to parents after health scare with Sophia
Has the Call Her Daddy podcast just pulled the best marketing stunt of all time?
Yet another former Islander has hinted at their return for Casa Amor
Stacey Solomon hints at baby girl's name as due date nears
You may also like
8 months ago
WATCH: People are losing it over clip of Kendall Jenner trying to climb stairs at Kourtney's wedding
9 months ago
Hilarious moment Irish Rail passenger spots "collapsed man" on platform
1 year ago
TikToker fakes a wedding photoshoot to get back at ex
1 year ago
You's Penn Badgley and Cardi B are fangirling over each other on Twitter
1 year ago
Bride receives bouquet of chicken nuggets from best friend on wedding day
1 year ago
These newlyweds wore tracksuits to their reception
Next Page