We'll be watching every single game of the FIFA Women's World Cup, because we can

Exciting things are happening for sports coverage in Ireland.

On this week's episode of PlayXPlay our panel of athletes and broadcasters discussed their sporting heroes and the changing face of sports coverage. The truth is, you don't need to be a massive sports fan to celebrate what's about to happen... this is about straight up equality.

The FIFA Women's World Cup kicks off on Friday and for the first time in Ireland every single match will be broadcast across RTÉ and TG4 free-to-air.

Our host, Jenny Murphy, was joined on the panel this week by RTÉ broadcaster Jacqui Hurley and Fight Connect TV founder Lydia Des Dolles. Aside from discussing Katie Taylor's astounding victory and Serena Williams shock turn at the French Open, the word on everyone's lips was football.

Listen below at 24.32 to hear some World Cup predictions from our panel or keep reading:

Ireland came close to qualifying for the World Cup before home defeats to Norway and The Netherlands put their World Cup dreams to bed. Disappointing as this is, the fact that we'll be able to switch on the TV each night and watch highly skilled world-class female athletes perform softens the blow significantly. Sports reporter and presenter Jacqui Hurley is a massive advocate for women across all facets of sport from coverage to punditry, she'll be playing a pivotal role in RTÉ's coverage and she told us what it means:

"We've never had anything like this before. It just means that people actually have the chance to just throw on their TV and there it is! The matches are at eight o clock in the evening, you're talking primetime TV. Not only is it free-to-air but the standard of football these days, anyone who watched the Women's Champions League final will tell you, we're going to get a spectacle and I can't wait for it to get going"

In terms of audience, Jacqui explained that although it's hard to quantify expectations there's high hopes:

"Because they've never done this before the measurables aren't really there, tentatively in their heads they probably have an idea of what they think will be good but we've seen that the appetite for women's sport is there. I think it'll be a good indicator of just how much the  landscape has changed once we do see the viewer figures, then we'll be able to debate the figures and say 'Was there enough interest or not?'. I think there genuinely is going to be this time around" 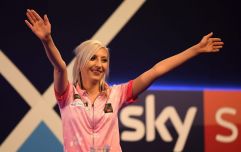 END_OF_DOCUMENT_TOKEN_TO_BE_REPLACED

The FIFA Women's World Cup coverage kicks off on RTÉ and TG4 on Friday, June 7 with the opening ceremony and the Group A meeting of hosts France and Korea, the coverage will be shared with RTÉ2 and RTÉ Player broadcasting 23 matches including three of the quarter-finals, one semi-final and the final on Sunday, July 7.

TG4 will broadcast 29 matches in total including the opening match, one quarter-final, one semi final, the match for third place and highlights of the final.

Watch the full episode of PlayXPlay below:

It wasn't all football focused this week, our panel also delved into Katie Taylor's fight in Madison Square Garden last weekend they discussed controversial punch stats and the subjective nature of sport in general. Contact sport expert Lydia Des Dolles said a draw in the fight would probably have been fair but she also called out so-called boxing experts who stated Taylor's victory was a robbery:

"I don't think Katie has faced someone like Persoon before, but a lot of the people that are on Twitter and who are now boxing experts that have probably never boxed a day in their life, or put a foot inside a gym, are now saying she (Persoon) was robbed. She wasn't robbed. It was very, very close.

Since the match Taylor and Persoon have both publicly stated that they would be up for a rematch.

Subscribe here to hear more from our weekly sports show.

popular
QUIZ: How well do you remember The Princess Diaries?
Will Smith admits to 'failing miserably' in 21-year marriage to Jada Pinkett Smith
Easy breezy: 5 comfy summer dresses you'll want to live in right now
QUIZ: How well do you remember the 2005 movie Pride & Prejudice
Security footage released of Naya Rivera as search is updated to recovery mission
Accents Coffee & Tea Lounge in Dublin has closed its doors for good
Glossier: A first-time buyers guide to this cult beauty brand
You may also like
10 months ago
The Toughest Temptation: Watch AIB challenge four die-hard GAA fans for a chance to win tickets to the final
10 months ago
"We're well able to strike the ball" Dublin's Laura Twomey on outdated Camogie rules
1 year ago
There's a draw on to WIN a house in Wicklow so go go go!
1 year ago
This woman became an Irish citizen to represent us at the Paralympics and we are not worthy!
1 year ago
On yer bike! EVERYONE needs to check out (and join) Dublin Sportsfest
1 year ago
Nab a chance to play at the All-Ireland Camogie Final and WIN €7,000!
Next Page