It is one of the most hotly-anticipated films of the year and on Wednesday night the stars of The Hunger Games: Mockingjay – Part 2 took to the red carpet in Berlin for the world premiere.

Jennifer Lawrence led the glamour in the German capital with a low-cut, floor-length purple gown. She opted for an elegant up-do and minimal jewellery.

She posed for photographs alongside her two leading men, Liam Hemsworth and Josh Hutcherson, who both looked dapper in their suits. 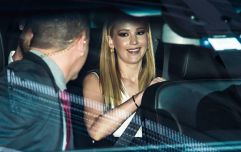 END_OF_DOCUMENT_TOKEN_TO_BE_REPLACED

Elizabeth Banks seemed to be channelling her onscreen alter-ego Effie Trinket with a quirky dress while Julianne Moore opted for a classic black outfit.

Donald Sutherland, aka President Snow, also alluded to the story with a white rose in his breast pocket.

Fans will be able to catch the final installment of the film franchise in Irish cinemas from November 20th.

For the last time Jennifer Lawrence will be stepping into the shoes of Katniss Everdeen as she and her friends battle against The Capitol.

Check out the final trailer below. (*Raises three fingers on right hand above head and whistles*)

Open gallery
popular
Stevie Nicks leads tributes following the death of Christine McVie
Gwen Stefani reportedly pregnant with baby number four
Gifts for Him: 18 affordable presents for your old fella, brother or boyfriend this Christmas
Why Are Men so Obsessed With Boobs? The Answer is Pretty Surprising...
Here are the first four people officially heading onto Dancing With The Stars
Mollie King announces death of her father just weeks after welcoming her first child
"You can’t imagine what it feels to have had a baby and yet feel like you didn’t"
You may also like
2 months ago
Jennifer Lawrence slams gender pay gap after earning $5 million less than Leonardo DiCaprio for Don't Look Up
9 months ago
Actress Jennifer Lawrence welcomes her first child
11 months ago
Don't Look Up mirrors our reality - and the future is bleak
1 year ago
Jennifer Lawrence is expecting her first baby with husband Cooke Maroney
2 years ago
Jennifer Lawrence is set to star in a new sci-fi comedy for Netflix
3 years ago
Jennifer Lawrence and her fiancé Cooke Maroney are getting married tomorrow
Next Page
Style | Celeb | Entertainment | 7 years ago
5
shares