When it comes to the fashion industry we all know that women are portrayed as being lithe, airy, flawless creatures with fantastic hair and a thigh gap wider than Wayne Rooney’s shots on goal.

Normally, the billion dollar industry feeds off the insecurities of women and certainly doesn’t cater to them.

With the help of social media and hashtags such as #bodypostive women are now more than ever able to see and relate to a diverse range of body types.

It seems that sports clothing giant Nike have clearly taken note of this hard-won trend. The multinational released their social media campaign for a new line of sports bras this week fronted by curvy model Paloma Elsesser.

Nike plans to feature more women as the campaign progresses, focusing on their own personal stories and other tips for women when they work out.

A spokesperson for the company has said

“No matter your chest size, gravity can cause tissue damage while you move-sports bras protect from this. Motion causes breasts to move in figure eight, and cupped designs can provide higher support for bigger breasts!” 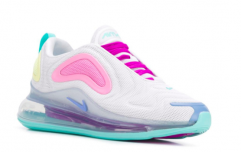 END_OF_DOCUMENT_TOKEN_TO_BE_REPLACED

In general, the response has been good for Nike, lots of people are praising the sports brand for recognising that women of all shapes and sizes work out and also care about fitness.

However, it is worth noting that the company is only offering the bras up to an E cup, which realistically excludes a lot of women both large and thin and highlights the extent, size wise, that Nike is willing to cater to.

Whenever a large multinational company decides to depict women in a realistic way, the internet explodes in applause so by these terms, the campaign is a genius marketing strategy.

Don’t get me wrong. I think it is fantastic that Nike has decided that showing women as the majority of us are is a good thing. I just wish this was the rule rather than the exception.

Do you have a body? Can you take it to the beach? If so, chances are you're ready.

popular
Family of four found dead in hotel sauna
Little Mix's Leigh Anne Pinnock addresses haters in tearful speech at 30th birthday party
The First Quadrillionaire? Paypal Accidentally Gives Man $92 Quadrillion
It looks like it's all over between Maura Higgins and Giovanni Pernice
"Real-life consequences": Strictly's Adam Peaty addresses near-kiss rumours
Gwen Stefani reportedly pregnant with baby number four
Here's what happens on every day of your menstrual cycle (roughly)
You may also like
1 month ago
Nike has given staff a week off as a "mental health break"
6 months ago
Nike sues over Lil Nas X 'Satan Shoes'
7 months ago
WATCH: Nike's latest ad featuring breastfeeding and pregnant athletes just dropped
1 year ago
QUIZ: Do you know the names of these classic runners?
1 year ago
Nike has created a pair of shoes specifically for nurses, doctors and other health workers
2 years ago
The distinct meaning behind Serena Williams' Swarovski Nike brooch
Next Page